Hamleys Acquired by Reliance: A Timeline of The World’s Oldest and Largest Toy Chain Which Survived Multiple Buyers and 5 Bombings 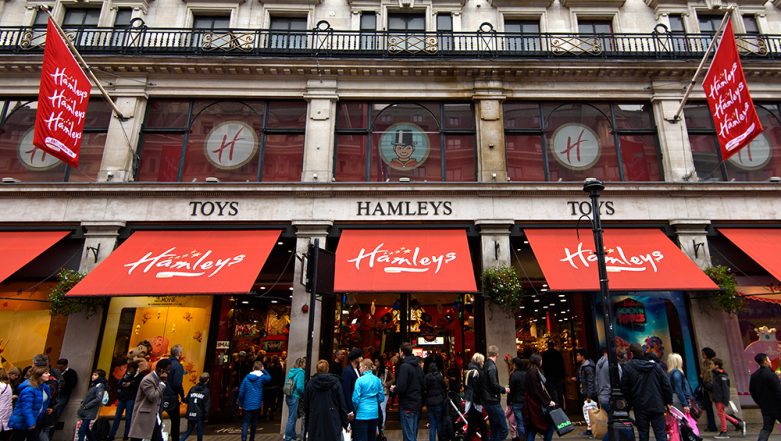 Mukesh Ambani-led Reliance Industries acquired the iconic British toy-maker Hamleys for 67.96 million pounds (around Rs 620 crore) on Friday. The deal comes at a time when the 259-year-old British toy-maker is going through a series of losses coupled with frequent change of ownership. Reliance Industries bought the store from Chinese fashion conglomerate C Banner International who had acquired it in 2015 for 100 million pounds (Rs 9 billion). Since 1760, Hamleys which boasts of being the "oldest and largest toy shop in the world" has sailed through tough times after being bombed during the second world war. Hamleys has also been shut down before due to bad business. Reliance Industries Acquires British Toy Maker Hamleys.

While the chain has ten other outlets in the United Kingdom and more than 60 franchises worldwide, in the past 15 years, the company has been witnessing a steady shift in ownership as profits continue to tumble.

Talking about the deal, Reliance Industries in a statement said, "Reliance Brands Ltd, a subsidiary of Reliance Industries, and C Banner International Holdings, a Hong Kong-listed company, today signed a definitive agreement for Reliance Brands to acquire 100 per cent shares of Hamleys Global Holdings Ltd, the owner of Hamleys brand, from C Banner International." And as with this acquisition of Hamleys brand and business places, Reliance emerges on the front-line of global retail, we have a look at the toy store's timeline of events from the past.

Hamleys' flagship store in Regent Street London is set over seven floors covering 54,000 sq ft, with over 50,000 lines of toys on sale. It is considered to be one of London's popular tourist attractions and receives more than five million visitors each year.