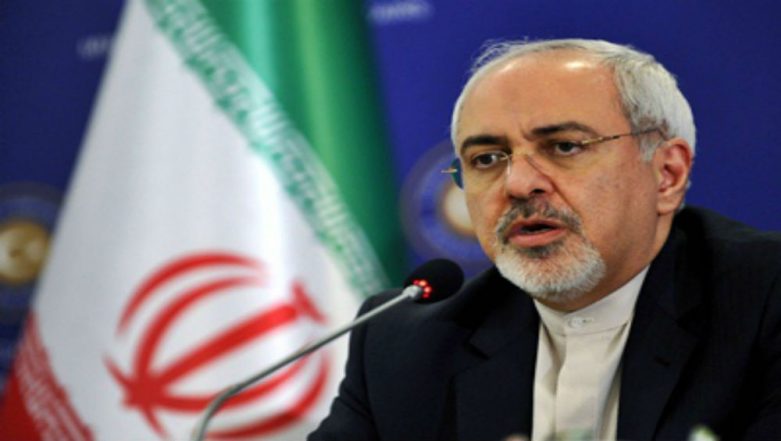 Washington, May 20: Iran on Monday dismissed US President Donald Trump's "genocidal taunts" and warned him not to threaten the country. With tensions rising, Trump tweeted on Sunday: "If Iran wants to fight, that will be the official end of Iran." Iran's Foreign Minister Mohammad Javad Zarif said the President should look at history. "Iranians have stood tall for millennia while aggressors all gone... Try respect - it works!," the BBC reported.

The US has deployed additional warships and planes to the Gulf in recent days. But Trump's tweet marked a shift in tone after recent attempts by him to downplay the possibility of a military conflict with Iran. Last week, when asked by reporters if the US was going to war with Iran, he said: "I hope not." Iran’s Mohammad Javad Zarif Calls for US Forces to Be Put On Tehran’s ‘Terror’ List.

His warning to Iran was issued hours after a rocket was fired into the heavily fortified Green Zone in the Iraqi capital, Baghdad, and hit a building about 0.5 km (0.3 miles) from the US embassy. The US recently evacuated non-emergency staff from the mission because of what it called a "serious" threat reportedly linked to Iran-backed forces in Iraq.

Writing on Twitter on Monday, Iran's Foreign Minister said the US President was being "goaded" by what he called the "B Team" - a reference to US National Security Adviser John Bolton, Israeli Prime Minister Benjamin Netanyahu and Saudi Crown Prince Mohammad bin Salman.

Trump "hopes to achieve what Alexander (the Great), Genghis (Khan) and other aggressors failed to do. Iranians have stood tall for millennia while aggressors all gone. #EconomicTerrorism and genocidal taunts won't 'end Iran'," he added. "#NeverThreatenAnIranian. Try respect - it works!" On Saturday, Zarif had insisted that Iran did not want war.