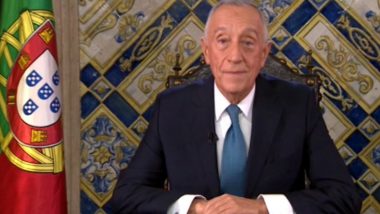 With 98.87 per cent of the ballots counted, Rebelo de Sousa, who has been in office since March 2016, won by garnering 61.3 per cent of the votes, Xinhua news agency reported on Monday.

Meanwhile, former member of European Parliament (MEP) Ana Gomes came came second with 12.54 per cent of the votes, ahead of right-wing party Chega candidate Andre Ventura, who came third with 11.89 per cent of the ballots, the results showed.

Sunday's presidential election was held with the lockdown measures under the state of emergency due to the Covid-19 pandemic, resulting in an abstention rate of 61.46 per cent, official data showed.

"I am happy with the effort of the Portuguese. In spite of all these (pandemic and inclement weather)... it was a huge effort that was not foreseen," Rebelo de Sousa said after casting his vote on Sunday afternoon.

(The above story first appeared on LatestLY on Jan 25, 2021 09:25 AM IST. For more news and updates on politics, world, sports, entertainment and lifestyle, log on to our website latestly.com).