White House Chief of Staff Mark Meadows has tested positive for the novel coronavirus, an official has confirmed. 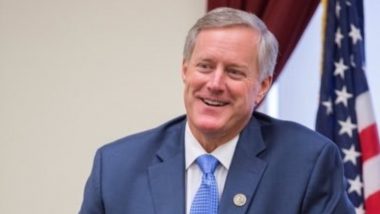 Washington, Nov 7: White House Chief of Staff Mark Meadows has tested positive for the novel coronavirus, an official has confirmed.

Meadows is the latest high-ranking White official to be infected with the virus in recent days after a number of senior officials of the administration, including President Donald Trump and First Lady Melania Trump were tested positive last month, The Hill news website.

It was not immediately clear when Meadows contracted the disease, but the official said on Friday that he was in attendance at a re-election campaign office in Arlington, Virginia, the same one which the President visited on Election Day. COVID-19 Vaccine News: Top Israeli Hospital Orders 1.5 Million Doses of Russian-Made Vaccine Sputnik V, Seeks Govt's Permission to Use.

The development on Friday came on the same day that the US reported over 125,000 single-day coronavirus cases, topping the record for daily infections for a second consecutive day.

According to the Johns Hopkins University, the US reported a total of 125,596 new cases on Friday, which increased the overall tally to 9,727,345.

With at least 1,137 new fatalities, the country's overall death toll surged to 236,025. The two tallies are currently the highest in the world, making the US the worst-hit country.

(The above story first appeared on LatestLY on Nov 07, 2020 11:18 AM IST. For more news and updates on politics, world, sports, entertainment and lifestyle, log on to our website latestly.com).