Mukesh Ambani on Time 100 Most Influential People of 2019 List 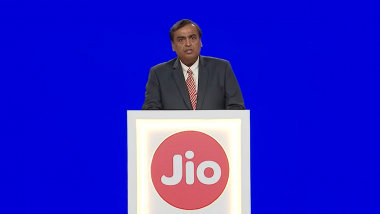 In the TIME 100 profile for Ambani, Mahindra Group Chairman Anand Mahindra wrote that Ambani's vision is more ambitious than that of the father whose blessings he unfailingly invokes at the launch of each initiative.

"The scale of his Reliance Jio mobile-data network, which has already connected over 280 million people in India with low-cost 4G, is impressive by any standard. But what is truly jaw-dropping is the way it will allow Reliance to potentially dominate a staggering array of new businesses."

(The above story first appeared on LatestLY on Apr 19, 2019 10:20 AM IST. For more news and updates on politics, world, sports, entertainment and lifestyle, log on to our website latestly.com).