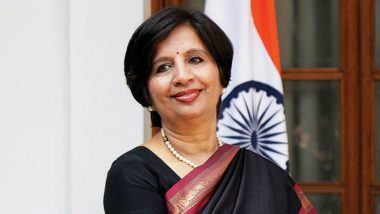 The talk of Rao will explore the influence of Gandhi on Dr. King. It will be moderated by Melanie Lawson, an award-winning journalist. Rao was received in Washington on Saturday by newly appointed Indian Ambassador to the US Harsh V Shringla.

"Delighted to receive N Menon Rao, former Foreign Secretary (I had the privilege of working closely under her supervision) and Ambassador of India to USA, who provided me with a wealth of information and suggestions on the relationship," Shringla tweeted.

"A genuine pleasure to meet an old friend and former colleague, our experienced, highly professional, competent and people-oriented new Ambassador to the US, Harsh V Shringla today in Washington," Rao responded.

The programme, coinciding with the 150th birth anniversary celebration of Mahatma Gandhi, will feature opening remarks by Consul General of India Anupam Ray and Houston Mayor Sylvester Turner. The interaction will be followed by performances by Indrajit Banerjee (sitar) and Shantilal Shah (tabla) and the Phillip Hall Singers.