Oil prices extended losses in Asian trade Monday and languished at 17-year lows, with the coronavirus crisis escalating around the world and no end in sight to a vicious price war. 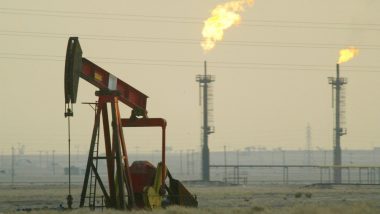 Singapore, March 30: Oil prices extended losses in Asian trade Monday and languished at 17-year lows, with the coronavirus crisis escalating around the world and no end in sight to a vicious price war.

US benchmark West Texas Intermediate fell 5.3 percent to trade at $20 a barrel, while international benchmark Brent crude was off 6.5 percent at $23.

The falls came after the death toll from the pandemic surged past 30,000 at the weekend as cases in hard-hit Europe and the United States showed no sign of letting up.

Senior US scientist Anthony Fauci estimated the virus could possibly result in 100,000 to 200,000 deaths in the United States, while President Donald Trump extended "social distancing" guidelines until April 30.

The president also said he expected the country to "be well on our way to recovery" by June 1 -- dropping his previous target of mid-April.

Oil markets have been plunging for weeks as lockdowns and travel restrictions imposed by governments worldwide to fight the virus strangle demand.

Even as demand falls, supply has increased dramatically after top producers Saudi Arabia and Russia engage in a price war following a row about whether to cut output to support prices.

At the end of last week, Riyadh said it had not been in touch with Moscow about potential output cuts while Russia's deputy energy minister said oil at $25 a barrel was not a catastrophe for the country's producers -- signalling the two sides are still far apart.

"Demand concerns are critical but well known, what really took the market down were the signals we got from Saudi Arabia and Russia that they intend to continue their current path," Vivek Dhar, a commodities analyst at Commonwealth Bank of Australia, told Bloomberg News.

"Market hopes of a deal have come undone."

There are fears the commodity could fall further as storage tanks around the globe approach full capacity.

"When the storage capacity is filled, we should probably expect a response from Saudi Arabia, Russia, and other essential oil producers," AxiCorp's Stephen Innes said, though he warned "the longer their response takes, the higher the risk of another steep decline in oil prices".

The retreat on oil markets comes after a bounce with equities last week that came after policymakers worldwide unleashed massive stimulus measures to prop up the virus-hit global economy.

(The above story first appeared on LatestLY on Mar 30, 2020 09:53 AM IST. For more news and updates on politics, world, sports, entertainment and lifestyle, log on to our website latestly.com).