Pakistan Information Minister Fawad Chaudhry said on Friday that the incumbent government has decided to form a commission to probe the alleged 'foreign conspiracy' behind the no-confidence resolution filed against Prime Minister Imran Khan by the Opposition, Express Tribune reported. 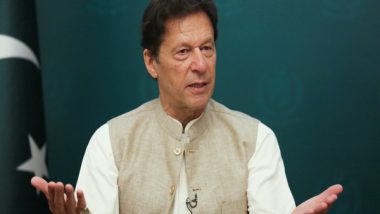 Islamabad, April 8: Pakistan Information Minister Fawad Chaudhry said on Friday that the incumbent government has decided to form a commission to probe the alleged 'foreign conspiracy' behind the no-confidence resolution filed against Prime Minister Imran Khan by the Opposition, Express Tribune reported.

Talking to the media following the Cabinet meeting, the minister stated that the commission will be headed by Lieutenant General (Retd) Tariq Khan. He said the commission would show that the communique does exist, after the Leader of the Opposition in the National Assembly, Shehbaz Sharif, claimed it to be fake. Pakistan Political Crisis: PM Imran Khan Calls for Fresh Polls After No- Confidence Motion Rejected in Pak Assembly.

According to Chaudhry, the commission would also investigate if the threat of a "regime change" is present in the communique. "Thirdly, it will aim to discover who were the local handlers who took this plan further and where the conspiracy originated from," he said, adding that it is impossible for all MNAs to be involved in it.

The minister further said that the government will present the record and witnesses of the 'foreign conspiracy' against Imran Khan to all parliamentarians, Express Tribune reported.

Comparing Mir Jafar giving way to the East India Company, which ultimately led to British rule across the subcontinent, to the current situation in Pakistan, Chaudhry claimed that if the country does not defend its independence, it would return to slavery.

The minister maintained that an "imported, selected government" would be imposed and controlled from outside the country, rendering Pakistan unable to make its own decisions.

The decision to form the committee comes ahead of the no-trust vote session in the Lower House, ordered by the Supreme Court for Saturday after it set aside National Assembly Deputy Speaker Qasim Suri's ruling dismissing the no-confidence resolution moved against Imran Khan.

(The above story first appeared on LatestLY on Apr 08, 2022 10:51 PM IST. For more news and updates on politics, world, sports, entertainment and lifestyle, log on to our website latestly.com).