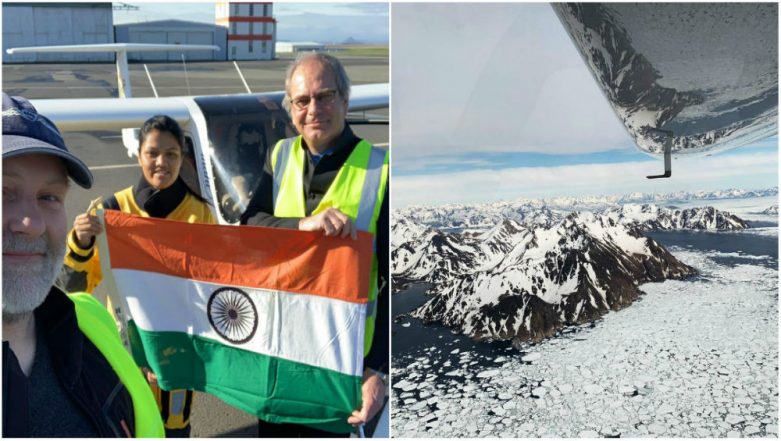 She achieved the feat around midnight Monday-Tuesday (May 13-14) when she landed her tiny aircraft at Iqaluit Airport in Canada, after a gruelling 3,000 km long flight, under adverse and extreme weather conditions following take-off from Wick, Scotland (United Kingdom), with brief stopovers in Greenland and Iceland.

"This is part of her ongoing year-long global circumnavigation flight which was launched wither friend Keithair Misquitta on July 30. Aarohi continued solo from UK to Canada, and they will return to India by July 30, 2019," said an excited Lynn de Souza, head of Social Access, a not-for-profit communications firm which organised and sponsored the expedition. Greenland Ice Melting Four Times Faster Than Expected: Study.

"En route, she set another world record as the first woman pilot to fly solo above the treacherous Greenland ice-cap in a LSA, and is due for at least half a dozen other records by the time she reaches India,a Lynn told IANS.

A commercial pilot and LSA licence holder, Pandit and her best friend Keithair Misquitta left India on the Women Empower (WE) Expedition in the tiny aircraft christened 'Mahi'.

'Mahi' is a tiny, single-engine Sinus 912 weighing a little of 400 kg or nearly equivalent to a Bullet motorcycle, manufactured by Pipistrel of Slovenia, and is also the first LSA registered by Directorate-General of Civil Aviation (DGCA) India.

Pandit and Misquitta flew over Punjab, Rajasthan, Gujarat, then to Pakistan, where they landed -- making it the first civilian LSA flight to land in the neighbouring country since 1947 -- and went onto to Iran, Turkey, Serbia, Slovenia, Germany, France and UK.

After landing in Iqaluit, Pandit proudly exhibited the Indian Tricolour presented to her by the Indian Ambassador to Canada Vikas Swarup, said Lynn.

"I am so honoured and grateful I could do this for my country and for women everywhere... Flying over the Atlantic Ocean is a humbling experience. Its just you and your little plane, the light blue sky above and dark blue see or shining white ice below," said a tired but cheerful Pandit in her landing remarks to her cheering friends in Mumbai, who stayed awake till early on Tuesday to witness her making history.

Though she admitted certain sectors in the long flight were bumpy, the "beauty of the ocean and islands was breathtaking and I would do it all over again in a heartbeat".

Pandit is an ardent fan of the legendary American aviator, Amelia Earheart -- who became the world's first woman to make a solo transatlantic flight in a bigger aircraft, 87 years ago, on May 20, 1932.

After a brief sojourn in Canada, the WE Expedition will continue with Pandit flying westwards to Russia, cross many a longitudes and hurdles, create or break more records, before she finally returns home by July 30, after clocking in around 37,000 km.