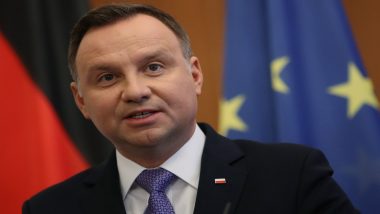 The incumbent, supported by the governing Law and Justice party, won 51.21 per cent of the vote in Sunday's presidential run-off, based on 99.97 per cent of precincts reporting, reports Xinhua news agency.

Trzaskowski received 48.79 per cent in the run-off held on Sunday.

PKW head Sylwester Marciniak said that although five precincts, including Warsaw and some ballots cast abroad still need to report, they will not influence the outcome.

The official turnout eventually stood at 68.12 per cent, which is 0.08 percentage point short of the record set in 1995, according to the PKW.

Exit polls indicated a very tight race, with only a 0.8 percentage point lead for Duda in the initial tally.

Two subsequent late polls however widened Duda's lead to 2 percentage points, which would all but guarantee him a second five-year term.

Speaking in the town of Pultusk, Duda claimed victory and invited Trzaskowski and his wife to the presidential palace to finish the campaign "with a handshake".

Addressing the nation ahead of Sunday's elections, Duda said he would continue strengthening the Polish state, "built on our inviolable tradition which is sacred to all of us and in which we have been brought up for generations".

During Sunday's voting, strict sanitary rules were in place, with surfaces disinfected and people required to keep a safe distance from one another.

Exit polls had indicated 62.9 per cent of voters cast their ballots in the first round of polls on June 28, up from 49 per cent five years earlier.

The presidential race, originally planned for May 10, was postponed due to the COVID-19 pandemic and the resulting lockdown. To date, Poland has a total of 37,891 COVID-19 infections, with 1,571 deaths.

(The above story first appeared on LatestLY on Jul 13, 2020 02:10 PM IST. For more news and updates on politics, world, sports, entertainment and lifestyle, log on to our website latestly.com).