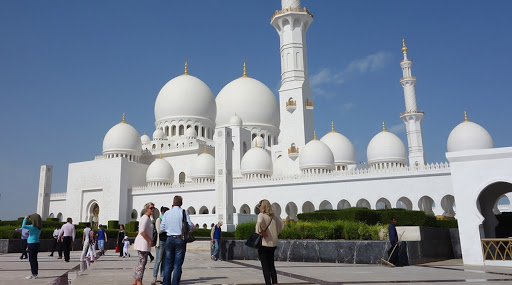 Abu Dhabi, January 7: The Abu Dhabi Judicial Department on Monday issued an order stating that anyone found guilty of religious intolerance would be jailed for five years and would be penalised up to Dh1 million. Issuing the order, the administration stated that any act that insults the divine entity, any religion, Prophet, messenger, divine book or house of worship will be considered contempt of religion, reported the Gulf News.

Elaborating more about the new order, Social Responsibility Specialist -- Ameena Al Mazrouei -- at the Abu Dhabi Judicial Department said, as quoted by the daily, "We stand against the differentiation of people based on their caste, creed and colour, and the offender will be jailed for five years and penalised up to Dh1 million as per the rules of the country." ‘American Cancer’ of Religious Violence Rocks Nation With Attacks on Jewish Synagogue in New York and Christian Church in Texas.

Adding more, Mazrouei said, "We respect all human beings and ensure they get fair services and justice. Whoever they are, irrespective of their religion, nationality, background or culture, they are treated equally here in the UAE. Everyone gets justice equally."

Under the Federal Law No (2) of 2015 -- pertaining to Discrimination and Hate -- Article (4) penalises the offender with five years jail. Also the penalty in these cases ranges from Dh250,000 to Dh1 million. The law pertains to: "Offending any religion or any of its sacred things, disrupting or preventing religious observances or ceremonies by violence, distorting in any way, any of the holy books, destroying or desecrating the sanctity of places of worship, graves, appurtenances or any of their contents."

The Abu Dhabi Judicial Department was of the opinion that the message of peaceful coexistence, communal harmony, religious tolerance and respect to all faiths among community members should be spread across. The new rule applies for all those who insults a religion, desecrates it or vandalises a house of worship --mosque, temple, synagogue, church or gurdwara.

Stating that the Justice Department keeping a close eye social media, she said, "If people are talking on social media sites, they are not allowed to disrespect any religion, faith or God. In case there is a breach, offenders will be charged under contempt of religion laws and will be penalised. We are also focusing on social media because nowadays, many people text messages at will and don’t realise that they may be hurting the feelings or beliefs of some others."