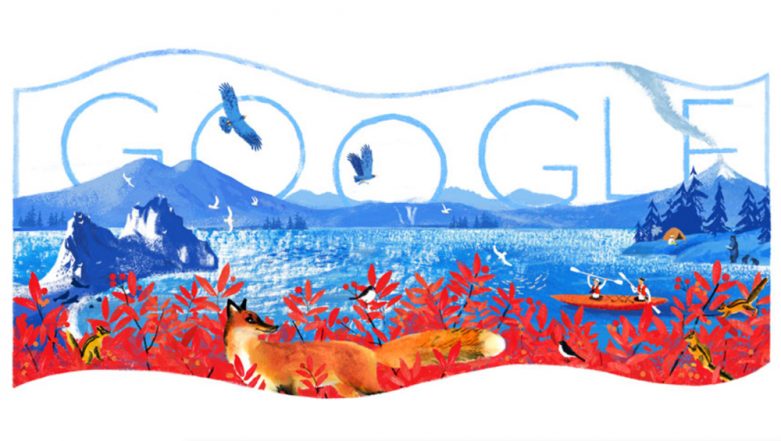 Google is observing Russia Day 2019 with a doodle! Russia Day which marks the adoption of the Declaration of State Sovereignty of the Russian Soviet Federative Socialist Republic (RSFSR) on June 12, 1990. It commemorates the birth of the independent Russian Federation, as well as the dissolution of the Soviet Union on the same day a year later. Various cultural activities, concerts and fireworks are held across Russia on this day.

With the 'Day of Signing the Declaration of State Sovereignty', June 12 was declared an official national holiday in 1994. It commemorates the formation of a new country and the post of President. The adoption of the colours red, white, and blue for the national flag, and the new national anthem was also chosen on the same. The day was renamed as Russia Day in 2002. Philippines Independence Day 2019: Google Doodle Commemorates Country's Freedom By Hoisting The National Flag.

On June 12, 1990, the 1st Congress of People's Deputies of the Russian Soviet Federative Socialist Republic (RSFSR, part of the Soviet Union) adopted the Declaration of State Sovereignty of the RSFSR.  Russia Day 2019 Google doodle features the country's beautiful landscape and popular sights like Mount Elbrus in the Caucasus; the Klyuchevskaya volcano; and Siberia's Lake Baikal.

The Google doodle is created by St. Petersburg-based guest artists Anya and Varya Kendel. Talking about the doodle, Kendel sisters said, "We love to travel around Russia. We have visited many places and we want every person to feel a responsibility for maintaining nature’s purity and beauty. With this Doodle, we want to encourage people to appreciate and preserve nature."