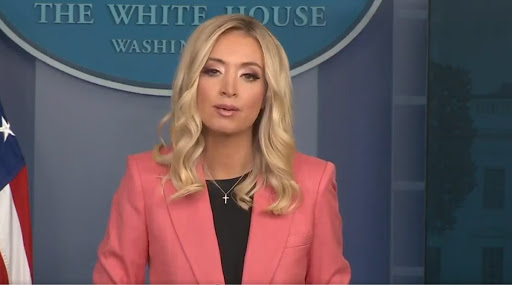 Washington, May 23: With the coronavirus death in the United States of America almost reaching 100,000, a major-goof up took place on Friday by White House Press Secretary Kayleigh McEnany where she mistakenly revealed President Donald Trump's banking details at a press conference.

According to a report, published by the Guardian, McEnany made an announcement to the press that President Trump would donate his quarterly pay cheque to the Department of Health and Human Services. She added further that this is being done to "support the efforts being undertaken to confront, contain and combat the coronavirus". However, along with the USD 100,000 cheque, she mistakenly showed Trump’s banking details to the White House reporters. Donald Trump Urges US State Governors to Allow Places of Worship to Reopen Immediately As Country Moves Towards Lifting of Lockdown.

Meanwhile, White House spokesman Judd Deere said that Trump's salary went to help advance new therapies to treat this virus, "but leave it to the media to find a shameful reason not to simply report the facts, focusing instead on whether the cheque is real or not".

It is to be known that the donation was as per the quarterly tradition of Trump to forgo his USD 400,000 salary and donate it. In the past, Trump has donated to the Small Business Administration initiative to help veteran entrepreneurs, to the Office of the Surgeon General to fight the opioid epidemic, and to the National Institute on Alcohol Abuse and Alcoholism, among other places.

(With Inputs from Agencies)