Extreme weather is a growing concern in Australia after the bushfire emergency of recent months, which has left 29 dead and ravaged vast swathes of the country, torching thousands of homes. 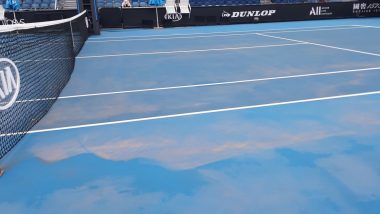 Melbourne, January 23: An Australian Open that has been hit by weather extremes faced a new challenge on Thursday: dirty rain, after overnight downpours left courts muddy and unplayable. Workers armed with squeegees and high-pressure hoses rushed to clean the surfaces, delaying matches on most of the courts. The dirty rain, blamed on smoke hanging in the air from Australia's raging bushfires, is just the latest hazard at a tournament that has been beset by meteorological mishaps.

Further rain set back Thursday's start still further, with most courts out of action until 3:00 pm (0400 GMT), four hours after they were due to begin. "Due to the rain and dust overnight the outside courts need high pressure cleaning," organisers tweeted. "Our team is working across Melbourne Park to prepare the outside courts for play," they added.

Smog from the deadly wildfires hit hazardous levels during qualifying, leaving players with coughing fits and breathing problems and triggering a rash of complaints. Although the haze cleared before the tournament's start on Monday it was replaced by torrential rain, which wiped out half of the day's schedule and caused a backlog of matches.

The year's opening Grand Slam is more accustomed to a different kind of problem: extreme heat, which frequently causes players to don ice towels and occasionally halts matches. Switzerland's Belinda Bencic was one of the few who were able to play on Thursday, as she beat Jelena Ostapenko on Margaret Court Arena, one of three stadiums with a retractable roof.

"I'm super-happy to get the match out of the way. I didn't know the (other) courts were, like, wet and dirty and all that. But for sure it was difficult today," Bencic said. "It was sometimes sunny and then suddenly was almost raining. Then windy. Yeah, you just kind of have to accept it and go with it and try your best." Men's champion Novak Djokovic, after contending with strong winds in his second-round win on Tuesday, said it was anyone's guess what the weather would serve up next.

"I don't know, you tell me," he said. "It's never pleasant to play in these kind of conditions when you have such a strong wind. Hopefully we won't be affected here in Melbourne by the quality of air." Melbourne, on Australia's southern coast, has a well-earned reputation for changeable weather, as it is prone to both cold Antarctic winds blowing across the Southern Ocean, and hot Outback breezes.

Extreme weather is a growing concern in Australia after the bushfire emergency of recent months, which has left 29 dead and ravaged vast swathes of the country, torching thousands of homes.