CU Soon is one of the few films that were shot during the countrywide lockdown due to the coronavirus pandemic. 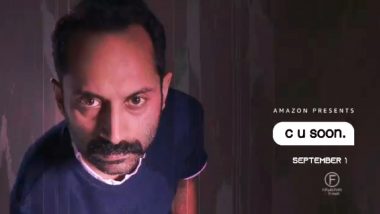 The story is about a software engineer from Kerala who has been assigned by his family to help his Dubai-based cousin find his missing fiancee, after she leaves behind a video-based suicide note. CU Soon is one of the few films that were shot during the countrywide lockdown due to the coronavirus pandemic. It was filmed through a phone in a controlled and restricted environment during the lockdown.

Faasil's filmography includes critically-acclaimed movies such as Chaappa Kurishu, Thondimuthalum Driksakshiyum, Bangalore Days and Njan Prakashan. The actor said working with Narayan was an "inspiring experience" for him. "We had an incredible stint with our erstwhile blockbuster Take-Off. Making CU Soon was an interesting and exciting experience. "Having shot the film entirely during the lockdown, we're immensely glad to be able to continue to entertain and bring exciting content for our audience even at a time like this and hope that fans across the world enjoy and share their love towards the film," Faasil, who also served as a producer, said in a statement. Malik: Fahadh Faasil's Intense First Look From Mahesh Narayanan's Film Looks Intriguing (See Pic).

Narayan said the concept of CU Soon is entirely new and has never been attempted before. "People are attempting to stay virtually connected during these unprecedented times, and we wanted to take this concept a step further by exploring a unique format of storytelling through multiple screen devices. This film would not have been conceptualised or created without the virtual communication softwares and their developers. "I hope this will inspire many artists to realise their creativity during such times and turn these challenging situations into opportunities to discover a new narrative of storytelling," the director said.

Vijay Subramaniam, Director and Head, Content at Amazon Prime Video India, said the movie will be a great watch for audience in the festival season. “Fahadh Faasil is synonymous with gripping Indian language blockbusters and a combination of him with director Mahesh Narayan in an experimental film format is definitely one to watch out for. "With Onam around the corner, we are hoping to add a little more sweetness to the festivities with the release of CU Soon," he added.