After piquing the interest of viewers by his commendable acting and dialogues by his ferocious and daring character Govind 'Guddu' Pandit in 'Mirzapur', actor Ali Fazal shared about how he prepared for Guddu Bhaiya version 2.0. 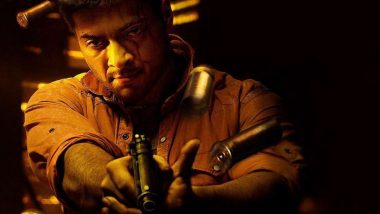 After piquing the interest of viewers by his commendable acting and dialogues by his ferocious and daring character Govind 'Guddu' Pandit in 'Mirzapur', actor Ali Fazal shared about how he prepared for Guddu Bhaiya version 2.0. In an exclusive interview with ANI, the actor dropped a major hint about his character and said besides the mental preparation for the upcoming season, one of the things that he did was making a lot of crayon artworks in a drawing book. Rhea Chakraborty Granted Bail: Farhan Akhtar, Ali Fazal and Other Bollywood Celebs Tweet in Support of the Actress

This may be a hint to one of the things that Guddu (Ali Fazal) can be seen engaged in the upcoming season. Looking forward to the response the second season of 'Mirzapur' is going to receive, actor Ali Fazal shared that the stars of the web series have kept the fans waiting and finally the wait is going to be over as 'Mirzapur 2' is set to premiere in a few days. Mirzapur 2 Poster: Ali Fazal and Shweta Tripathi’s New Still Promises Cold Revenge!

The 33-year-old star shared his excitement about the much-anticipated second season. "Of course, I'm excited, I'm very excited, we have stolen a lot of time from the fans, from everybody and everybody is really patient and we really hope that we maintain the standards, quality and the flavour of the first season."

On being asked about the character (Guddu Bhaiya) essayed by Ali on the much-loved web series and the rage around it, he said, "Yes, there is a huge rage, it's a very different take on this character and he's a bit grown and mature now. He went through a family tragedy, and we don't expect the person to be the same goofy, funny and I'm looking forward to the feedback from people. From my side, I did something different, let's see how it goes."

Talking about the preparations he went through for the much-loved character 'Guddu Bhaiya' in Season 2 the 'Fukrey' star said, "This time the preparations were less, and I had to maintain the size of my body so I had my little share of gyming, cerebral preparation was also there. And since we had done the first season, it was a little memory and it really did help." Another thing that he shared exclusively with ANI was that he has been sketching with crayons as he prepped for the 2.0 version of 'Guddu Bhaiya'.

Talking about his future projects, the actor said he has shot two films amid the pandemic and is looking forward to shooting another one in some days.

Ali also shared that he was spending his time at home solving a 1,000 words puzzle and that is one of the things that has got him engaged amid the pandemic at home. Earlier this week, the makers of 'Mirzapur' shared a gripping trailer of the much-awaited second season.

The two-minute-thirty-eight-second trailer chronicles the world of Mirzapur that has become more about power, politics and revenge. It is about conspiracies and people double-crossing each other while carrying guns that they will not hesitate to use. This season does not stay confined to the violent world of Mirzapur, it takes people to the power corridors where a nexus between politics and criminals prevails.

The trailer also takes the viewers to a land beyond Mirzapur, a place that has its own set of violent and powerful families running various illegal businesses. The women of Mirzapur have become bolder and more complex. They will not hesitate in using any means to achieve their goals. Produced by Farhan Akhtar and Ritesh Sidhwani under their banner Excel Media & Entertainment, the second season of Mirzapur will premiere on October 23 on Amazon Prime Video.