Beating Retreat Ceremony 2022: Vijay Chowk To Be Closed for General Traffic on January 29

Vijay Chowk will be closed for general traffic on January 29 from 2:00 pm to 9:30 pm in view of the Beating Retreat Ceremony which will take place as a part of Republic Day celebrations. 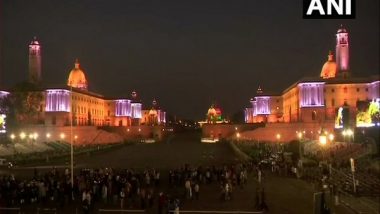 New Delhi, January 27: Vijay Chowk will be closed for general traffic on January 29 from 2:00 pm to 9:30 pm in view of the Beating Retreat Ceremony which will take place as a part of Republic Day celebrations.

Elaborate traffic arrangements have been made in view of the ceremony. Arrangements have also been made for Illumination of Rashtrapati Bhawan, North Block, South Block and Parliament House. Also Read | Gujarat: FIR Against Man in Anand For Giving Wife Triple Talaq Through Instagram.

As per a traffic advisory from Delhi Traffic Police, traffic will be closed between the following stretches from 2:00 pm to 9:30 pm on January 29 in view of the event: Rafi Marg between Roundabout Sunehri Masjid and Roundabout Krishi Bhawan. Raisina Road from Roundabout Krishi Bhawan towards Vijay Chowk. Also Read | Omicron Spread: Centre Extends COVID-19 Guidelines Till February 28, Asks State Govts Not To Lower Guard Against the Pandemic.

Coming to Metro services, Entry/Exit gates at Rail Bhawan and Udyog Bhawan and Central Secretariat metro stations will be closed from 2:00 pm till 6:30 pm on the day of the ceremony.

Delhi Transport Corporation (DTC) and other city buses will also be diverted from their normal routes from 2:00 pm to 9:30 pm on the day of the event to facilitate the vehicles of invitees and spectators and to avoid traffic congestion on roads round the venue of the ceremony and India Gate.

Buses coming from South Delhi on Tughlak Road and bound for Connaught Place/ Central Secretariat will be diverted from Aurobindo Chowk to Safdarjung Road- Kamal Ataturk Marg- Panchsheel Marg- Simon Boliver Marg and follow the route as mentioned at Serial No. 1.

The advisory says that buses coming to Mandi House and Feroz Shah Road and proceeding to Connaught Place via Barakhmaba Road will terminate at Shivaji Stadium and return via Kasturba Gandhi Marg/ Barakhamba Road.

Parking will be available for those coming to see illumination at Vijay Chowk behind the water channels between Rafi Marg and 'C' Hexagon after 7 PM. The advisory says that in case of any unidentified object or suspicious persons being seen, information must be conveyed to the nearest policeman on duty.