All Union ministers have been asked to resume work in their ministries from Monday and focus on kick-starting the economy post lockdown, sources said on Saturday. 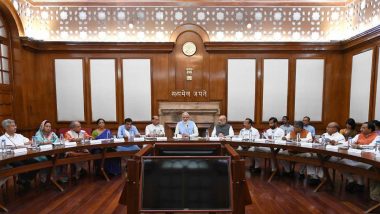 New Delhi, April 12: All-Union ministers have been asked to resume work in their ministries from Monday and focus on kick-starting the economy post lockdown, sources said on Saturday.

They also said the government is mulling giving relaxation in curbs for agriculture and industrial sectors in areas which are least affected by COVID-19, if the lockdown is extended.

There is also a suggestion to divide the country into three zones -- red, orange and green - based on the number of COVID-19 cases in those areas and allow some industrial activity in orange and green areas while maintaining standard operating procedures of social distancing.

The government is broadly focusing on two things, hotspots of COVID-19 to contain the spread of the disease and on efforts to kick-start the economy once the lockdown is lifted, an official said.

Besides the ministers, all officers of the joint secretary level and above will also be present in the ministries along with one-third of the essential staff from Monday, the sources said. "Government has desired that all officers who are entitled to official transport facility will come to office from Monday ie officers of the level of SAG (Joint Secretary) or higher," a source said.

Even during the lockdown, Health, Finance, Rural Development and Agriculture among other ministries were working, while activities of others were restricted, sources said.

"Government was not out of action during the lockdown, but now it is scaling up its activities," another official said adding the idea is to ease the process of lifting of lockdown so that ensuing period is hassle-free and the government has started doing its homework for the same.

Other sources in the government said there could be some easing of curbs for agriculture and its allied activities as harvesting season is about to start. There is also a view that those large industries or plants which can house their workers within their premises might be allowed to function.

Farmers and industry bodies have sought certain relaxations during the lockdown to carry out necessary activities, they said. However, the prospects of easing restrictions on inter-district transport, railways and airways at this moment appear slim and these are likely to continue for some more time.

Meanwhile, the Centre is considering a request made by most states to extend the ongoing nationwide lockdown by two more weeks beyond April 14, after Prime Minister Narendra Modi interacted with chief ministers and told them that focus should be now on health as well as prosperity of the nation.

There are indications that an extension in lockdown may come with certain relaxations to boost economic activities and sources said proposals being considered include lesser restrictions in areas unaffected by the virus spread.

During his interaction, Modi, himself wearing a white mask, told chief ministers that now it is imperative to focus on both aspects, 'Jaan bhi Jahan Bhi', for India's bright future, and prosperous and healthy India. The ongoing 21-day nationwide lockdown to contain the COVID-19 crisis, announced by Modi on March 24, is scheduled to end on April 14.