While the first schedule was shot extensively across multiple locations in Mumbai, the second schedule will go on floors in Goa. 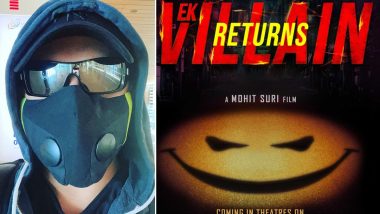 After wrapping up the first schedule of Ek Villain Returns in Mumbai recently, the makers are all set for the second schedule. While the first schedule was shot extensively across multiple locations in Mumbai, the second schedule will go on floors in Goa. The makers took this decision of shifting the shoot location after considering the rising COVID-19 cases in Mumbai. With the possibility of a lockdown, it made sense to move the shoot outside the city since it's a large production that calls for several big action pieces, big romance portions which can only be shot on live locations. Ek Villain Returns: Mohit Suri Heads to Goa for the Shoot of John Abraham, Disha Patani’s Film.

Director Mohit Suri, who along with his team, flew down to Goa a few days back for a quick recce, is all set to begin shooting for the movie from April 16. Interestingly, 'Ek Villain' was also shot in Goa, just like some of Mohit's other films including 'Malang', 'Aashiqui 2' among others. Speaking about taking the film's second schedule shoot to Goa, Ekta Kapoor shared, "Shooting during these times is hard on the cast and crew, but they've shown fantastic resilience and great teamwork and have turned things around at such short notice; we are ready to roll this week. EK Villain Returns: John Abraham And Disha Patani Start Shooting From Today (View Pic).

The scale and mounting of the film calls for live, scenic locales instead of studio floors. Also, Goa has always been a character in itself in Mohit's films. So I am excited to see how Mohit will showcase Goa in Ek Villain Returns." Bhushan Kumar added, "Our first schedule went off well in Mumbai last month, but with rising cases in the city, we have to be careful and ensure safety of our cast and crew. Mohit and his team scouted some good locations in Goa where the team shoots next.

Goa has always been an integral part of all Mohit's films, Ek Villain Returns will also make the place an important character. The protocols laid down by our governments will be followed and we hope the shoot goes off well." 'Ek Villain Returns' is being helmed by Mohit Suri and jointly produced by T-Series and Balaji Telefilms. Featuring John Abraham, Arjun Kapoor, Disha Patani and Tara Sutaria, the film releases on February 11, 2022.

The film will mark the reunion of Arjun and Mohit, after the duo's 2017 drama 'Half Girlfriend'. Tara reportedly will get to sing a song in the film, besides essaying a role. 'Ek Villain Returns' is the sequel of the 2014 Bollywood film 'Ek Villain' which featured Sidharth Malhotra, Shraddha Kapoor, and Riteish Deshmukh in the lead roles. Released in 2014, 'Ek Villain' revolved around the story of a hardened criminal whose terminally ill wife is murdered by a serial killer. Starring Sidharth, Shraddha, and Riteish in lead roles, the movie was a box office hit.

Mohit, who is helming the upcoming film, is widely known for films like 'Half Girlfriend', 'Aashiqui 2', 'Murder 2', 'Zeher' and 'Kalyug', among others.

Apart from the 'Ek Villain' sequel, John also has films like 'Satyameva Jayate 2' and 'Mumbai Saga' coming up. Meanwhile, Arjun is awaiting the release of 'Sandeep Aur Pinky Faraar' and 'Bhoot Police'. Disha will next be seen in Salman Khan-starrer action movie 'Radhe'.