Mirabai Chanu opened India's medals tally on Saturday as she bagged a silver in the Women's 49kg category here at Tokyo International Forum. 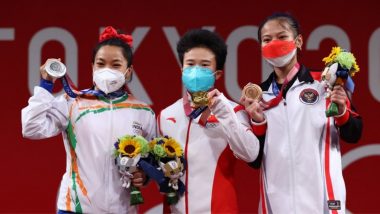 "Mirabai Chanu! Absolutely amazing display of weightlifting. The way you have transformed yourself after your injury and clinched a historic silver for #TeamIndia is absolutely stupendous. You have made India very proud," tweeted Tendulkar.

Former India sprinter PT Usha also congratulated Chanu on winning silver and making the entire country proud. "Many congratulations to @mirabai_chanu on the silver medal win. Stepping up at the biggest stage. The entire nation will be proud of that performance," tweeted PT Usha.

Taking to Twitter, India football captain Sunil Chhetri wrote: "You didn't just lift weights and pick a medal there, champion. You lifted a nation that needed to find joy and you did it with the widest smile. Take a bow @mirabai_chanu."

Former India opener Virender Sehwag also took to Twitter and wrote: "Ghazab. Bhartiya Naari Sab par Bhaari. #MirabaiChanu , remember the name. Thank you for making us all proud @mirabai_chanu, and winning us a Silver at the Olympics. Many more to come. #Tokyo2020."

Chanu lifted a total of 202 kg (87kg in snatch and 115kg in clean and jerk) during her four successful attempts across the competition. China's Zhihui Hou bagged gold with a total of 210kg and created a new Olympic Record while Indonesia's Windy Cantika Aisah grabbed bronze with a total of 194kg.

With this monumental silver medal, Chanu has become the second Indian weightlifter to win an Olympic medal after Karnam Malleswari bagged bronze in the 69kg category at the 2000 Sydney Games when the weightlifting arena was opened to women for the first time.