Pollard played a majestic knock of 87 off 34 deliveries and helped Mumbai Indians chase down a mammoth target of 219 in a high-scoring last-ball thriller. 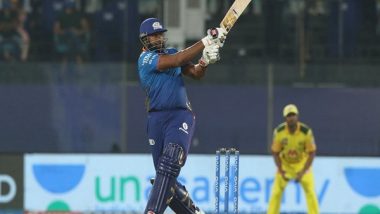 New Delhi, May 2: Mumbai Indians all-rounder Kieron Pollard shied away from taking the credit for their humongous run chase against Chennai Super Kings (CSK) in the ongoing Indian Premier League (IPL) on Saturday. Pollard played a majestic knock of 87 off 34 deliveries and helped Mumbai Indians chase down a mammoth target of 219 in a high-scoring last-ball thriller. The West Indies all-rounder said the chase was made possible due to a total team effort from a batting perspective.

"There are a lot of guys who are talented in their own right. A lot of guys have played international cricket and for different franchises. Not to name anybody but the guys have the talent. It was nice to get that opportunity to bat the overs and win the game for the team," said Pollard in a virtual press conference. Keiron Pollard Slams Critics After Prolific Performance Against CSK, MI All-Rounder Says ' Stop Writing Off, Been There Done That & Will Continue Doing It' (Watch Video).

Chasing a massive target of 219, Mumbai Indians openers Rohit Sharma and Quinton de Kock gave the side a decent start before going back to the dugout.

Krunal Pandya and Hardik Pandya also chipped in with few shots alongside Pollard which helped Mumbai Indians remained in the chase till the last ball.

With 2 runs required off the final ball, Pollard got Mumbai Indians over the line and helped them win the game by six wickets. "We had a small conversation in the dressing room in the halftime. We knew how good the pitch was and we knew if we stayed in there, we can't win the game in six overs but if we get that foundation, we have the armory in the tank to deliver for us," said Pollard.

"So, from the onset, the way Rohit and Quinton played and gave us a good start in the powerplay before we stuttered and lost a couple of quick wickets. But after that it was a matter of picking the bowlers and execute as best as possible. So, I think it was a total team effort from a batting perspective," he added.

With this win, Mumbai Indians remain at the fourth spot with 8 points. On the other hand, CSK also remains static at the first spot with 10 points. Mumbai Indians will next take on SunRisers Hyderabad (SRH) on Tuesday at the Arun Jaitley Stadium.