Pair of Saurabh Chaudhary and Manu Bhaker failed to qualify for the medal match in the 10m Air Pistol Mixed Team event after finishing the Qualification stage 2 at the seventh spot here at the Asaka Shooting - 10m Range. 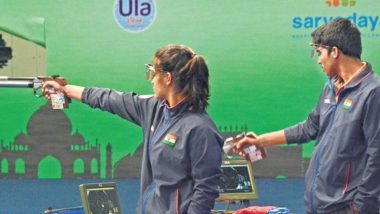 Saurabh shot a total of 96 in his first series of Qualification stage 2 while Manu shot 92 and they were positioned at eighth place by the end of series 1.

In series 2, Saurabh shot 98 while Bhaker finished with 94, but it was not enough to help them secure a place in either of the medal matches.

Earlier, Saurabh and Manu Bhaker had progressed to Qualification stage 2 of the 10m Air Pistol Mixed Team event after registering a total score of 582 in Qualification stage 1. Bhaker and Chaudhary finished at the first spot while the other Indian pair of Yashaswini Deswal and Abhishek Verma however bowed out after finishing at the 17th spot. (ANI)