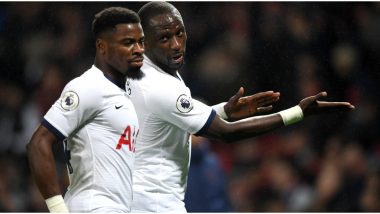 According to local media reports, Christopher was fatally shot and was hit in the abdomen by a suspect. He was confirmed dead after he was taken to the hospital.

The suspect is on the run and police have started an investigation into the matter.

Christopher was a professional footballer like his brother, they both started their career at Lens. After leaving Lens, Serge Aurier teamed up with Toulouse in 2012 and then joined Paris Saint-Germain, initially on loan before the deal was made permanent, Goal.com reported.

The defender joined Premier League club Tottenham in 2017 on a four-and-a-half-year deal and has featured in 54 league games for the club. The Ivory Coast international has made 39 appearances across all competitions for Spurs in this campaign.

Tottenham mourned the demise and has expressed solidarity with Serge saying they are with the defender in these difficult times.

"The Club is deeply saddened to confirm media reports that Serge Aurier's brother passed away in the early hours of this morning. We are supporting Serge at this difficult time and we ask that the privacy of the player and his family is respected," the club said in a statement.

"Everybody at the Club sends their sincerest condolences to Serge and his family. Our thoughts are with them all," it added.

However, it is uncertain that Serge would feature in the match against Newcastle United on Wednesday.