They also expressed grave concern over an unprecedented humanitarian crisis in the world as over 34 million people are already facing emergency levels of food insecurity and are one step from catastrophe or famine, according to the UN. 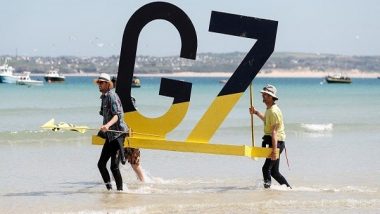 London, June 13: The G7 leaders on Sunday strongly condemned the military coup in Myanmar and the subsequent violence committed by the security forces on civilians. The group called for the immediate release of those detained arbitrarily including civilian leader Aung San Suu Kyi.

In its Carbis Bay Communique, the world leaders said: "We condemn in the strongest terms the military coup in Myanmar, and the violence committed by Myanmar's security forces, and we call for the immediate release of those detained arbitrarily. We pledge our support to those advocating peacefully for a stable and inclusive democracy."

"Recalling ASEAN's central role, we welcome its Five Point Consensus and urge swift implementation. We reiterate our commitment to ensuring that neither development assistance nor the sale of arms will benefit the military, and urge businesses to exercise due diligence in their trade and investment in the same vein," it added. UN Says 100,000 People Flee Amid Attacks by the Army in Eastern Myanmar.

The countries further reaffirmed unity on pursuing additional measures should they prove necessary in the situation and expressed concern over the humanitarian situation. They called for unfettered humanitarian access to vulnerable and displaced populations, support to the Humanitarian Response Plan, and encouragement of others to contribute.

Earlier, several hundred Myanmar residents in Britain gathered at the site of the G7 summit in Cornwall, calling for action to save democracy in Myanmar.

As the military crackdown on anti-coup protesters in Myanmar continues, as many as 840 people have been killed so far, according to the Assistance Association of Political Prisoners (AAPP).

The army overthrew Suu Kyi, saying her party had cheated in November elections, an accusation rejected by the previous election commission and international monitors.

The G7 nations also committed to ensure that Iran will never develop a nuclear weapon, while welcoming the substantive discussions between Joint Comprehensive Plan of Action (JCPOA) participants, and separately with the United States, to accomplish a return of the United States and Iran to their JCPOA commitments.

"We urge Iran to stop and reverse all measures that reduce transparency and to ensure full and timely cooperation with the International Atomic Energy Agency. A restored and fully implemented JCPoA could also pave the way to further address regional and security concerns," the statement read. It also expressed concerns over humanitarian situations in Ukraine, Belarus, Chad, Mali, Afghanistan, Iraq and more.

"We are deeply concerned that the pandemic has set back progress towards the Sustainable Development Goals and continues to exacerbate global inequalities, and therefore recommit to enhance our efforts to achieve the SDGs by 2030, including by supporting the Addis Ababa Action Agenda (AAAA) and aligning financial flows with the SDGs," said the leaders in the joint communique.

Citing the International Monetary Fund (IMF), the G7 countries highlighted that low-income countries will need around USD 200 billion to respond to the pandemic and USD 250 billion in investment spending for convergence with advanced economies.

They also expressed grave concern over an unprecedented humanitarian crisis in the world as over 34 million people are already facing emergency levels of food insecurity and are one step from catastrophe or famine, according to the UN.

"Working together and with others, and by building on and going beyond our existing action, we will develop a partnership to build back better for the world with the aim of maximising impact on the ground to meet the needs of our partners, and to ensure our collective effort is greater than the sum of its parts," they said.

"As we do so we look forward to joining with others to ensure we build back better, in particular at the G20 Summit, COP26, and CBD15 and the UN General Assembly, and reiterate our support for the holding of the Olympic and Paralympic Games Tokyo 2020 in a safe and secure manner as a symbol of global unity in overcoming COVID-19," read the communique's concluding remarks.