Guterres, nominated by the Government of Portugal, is the only official candidate for the position of Secretary General as of now and his re-election is a given. 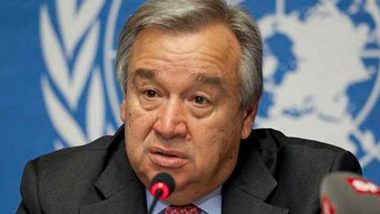 United Nations, May 26: India has conveyed its support to UN Secretary General Antonio Guterres for his candidature as chief of the world body for a second five-year term beginning January 2022.

External Affairs Minister S Jaishankar met Guterres here Tuesday on and had a "warm and comprehensive” meeting during which he discussed several critical issues including the COVID challenge, importance of ramping up vaccine supply chains, climate action, regional challenges and India's priorities during its upcoming Presidency of the Security Council in August.

"India values UNSG's leadership of the UN, especially in these challenging times. Conveyed our support for his candidature for a second term," Jaishankar said in a tweet after the meeting. COVID-19 Cannot Be Beaten One Country At A Time, Says UN Secretary General Antonio Guterres.

Later, a press release issued by the Permanent Mission of the India to the UN also stated that Jaishankar "conveyed that India values Secretary General's leadership of the United Nations, especially in these challenging times. He conveyed India's support for his candidature for re-election for a second term."

This is the first time that Jaishankar has publicly stated India's support for a second term for Guterres. Guterres, the ninth Secretary-General of the United Nations, took oath of office on January 1, 2017 and his first term ends on December 31 this year. The term of the next Secretary General will begin on January 1, 2022.

Former prime minister of Portugal, Guterres served as the United Nations High Commissioner for Refugees for a decade from June 2005 to December 2015. Guterres, nominated by the Government of Portugal, is the only official candidate for the position of Secretary General as of now and his re-election is a given.

In March, Guterres had circulated his vision statement and earlier in May, laid out his case for a second term to UN Member States during an informal interactive dialogue convened in the General Assembly Hall. Following this informal dialogue, the Security Council will begin its selection process for the world's top diplomat by June.

Guterres was elected after a reformed selection process that included a public informal dialogue session in the General Assembly, involving civil society representatives, aimed at ensuring transparency and inclusivity.

In his vision statement 'Restoring trust and inspiring hope', Guterres said that the imperatives for the next five years include mounting a massive and enduring response to the COVID-19 pandemic and its consequences in the short-term, leaving no stone unturned in the search for peace and security, making peace with nature and climate action, turbocharging the Decade of Action to achieve the Sustainable Development Goals and advocating for a more equitable world among other issues.

"As we emerge from the pandemic, the UN is more relevant than ever…We must act as a catalyst and a platform for more inclusive, networked and effective forms of multilateralism.

"Our direction of travel is clear on peace and security, climate action, sustainable development, human rights and the humanitarian imperative. Our power to transform the current situation into a better world and future for all depends on everyone everywhere and can only be done successfully if we are resolute and resolved to combine our efforts towards our common agenda for the benefit of humanity and the planet,” Guterres said in his vision statement.

In January, Guterres had confirmed that he will be seeking a second five-year term as chief of the world organization.

In accordance with Article 97 of the UN Charter, the appointment of the Secretary General is made by the General Assembly, on the recommendation of the Security Council, which in effect means that any of the five permanent members can veto the nominee.