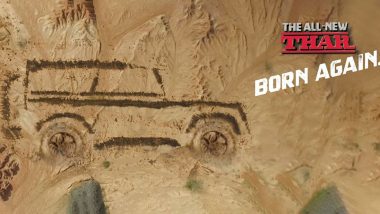 Mahindra and Mahindra, country's leading utility manufacturer is all set to reveal the much-awaited new-generation Thar off-roader SUV in India on August 15, 2020. Well, you read that right. The homegrown automaker will be using this auspicious day for the unveiling of its iconic SUV in the country. The UV maker officially announced the date of unveiling on its social media account by sharing a teaser video confirming that the SUV will be revealed on this Independence Day. Through the social media post, the auto manufacturer specified that the new generation Thar will be loaded with several features as far as safety, convenience and comfort is concerned and staying focused on vehicle's core properties of off-roading and iconic design. Maruti Suzuki S-Cross Petrol Launched in India at Rs 8.39 Lakh; Prices, Features, Variants & Specifications.

The upcoming Thar will be underpinned by an all-new ladder on frame chassis. The new architecture will help the Thar with better driving dynamics and enhanced off-road abilities. The carmaker has been extensively performing road testing of the vehicle for quite some time now. Moreover, Mahindra has revealed in the past that the new Thar will be a global model and we can expect the company to launch the SUV in various international markets.

The wait is over. This Independence Day, witness the Thar being born again in an all-new avatar! Save the date: 15th August 2020. Watch the teaser now! https://t.co/D1Imzbae1K #AllNewThar #BornAgain pic.twitter.com/vSXlm9VmHK

The SUV will sport feature-rich interior with several new features on board. It will include a new dashboard, re-positioned passenger grab handle, new steering wheel and seats, front-facing rear-seats and more. The SUV will also be equipped with various creature comfort features for enhanced convenience.

Mechanically, the SUV will be powered by a 2.0-litre TGDI mStallion petrol engine which will be tuned to make 190PS of power against 380 Nm of peak torque. The SUV will also be seen in a petrol derivative with a new 2.0-litre four-cylinder engine. Transmission duties will be handled by a 6-speed manual gearbox along with torque converter automatic unit. When launched, the new Mahindra Thar will take on the likes of Force Gurkha SUV and the upcoming Maruti Jimmy (5-door). The SUV is likely to be priced in India from Rs. 9.9 lakh onwards.

(The above story first appeared on LatestLY on Aug 05, 2020 11:28 PM IST. For more news and updates on politics, world, sports, entertainment and lifestyle, log on to our website latestly.com).