Akshay Kumar Birthday: From Oh My God 2, Mission Cinderella, Ram Setu to Prithviraj, Every Upcoming Movie of the Bollywood Superstar

Akshay Kumar is the only celeb in the industry who is working non-stop without any breaks and the hard work of the superstar is often paid by his film's box-office numbers to say the least. Let's not waste any time and quickly let's take a look at every upcoming film of the Bollywood star, Khiladi Akshay Kumar. 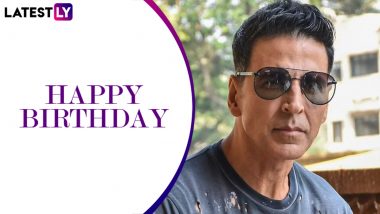 Akshay Kumar turns 54 today and the Bollywood star suffered a big loss recently after the demise of his mother  Aruna Bhatia said goodbye to the world. The actor rushed back to see her ailing mother leaving Cinderella shoot in the UK as he travelled back to Mumbai to see her Mother who is admitted to the ICU. A birthday without any celebration for the box-office Khiladi Akshay Kumar is the only actor in the industry who is loaded with projects and there are at least 9 movies lined up to release for the box-office Khiladi. Akki was last seen in Bell Bottom which was released in some parts of India and did exceptionally well considering the screens it got. Akshay Kumar’s Mother Dies: Rohit Shetty, Riteish Deshmukh and Other Celebs Attend Aruna Bhatia’s Last Rites (View Pics).

Pandemic has affected the release of many of Khiladi's films but he hasn't stopped signing new movies. Yes, unstoppable Akshay Kumar is the only celeb in the industry who is working non-stop without any breaks and the hard work of the superstar is often paid by his film's box-office numbers to say the least. Let's not waste any time and quickly let's take a look at every upcoming film of the Bollywood star, Khiladi Akshay Kumar.

Akshay Kumar is now leading Rohit Shetty's copverse with upcoming action-drama Sooryavanshi starring Ranveer Singh, Ajay Devgn and Katrina Kaif. The film is delayed since the pandemic first hit India in March when it was officially slated to hit theatres. No official release date for the movie is locked yet. Akshay Kumar’s Mother Aruna Bhatia Passes Away, Actor Says ‘Today I Feel an Unbearable Pain at the Very Core of My Existence’.

Reports suggest that Akshay Kumar is all set to reprise the role of Lord Krishna for Amit Rai directorial Oh My God 2. The film also stars Pankaj Tripathi and Yami Gautam in major roles and Akki is expected to begin filming for the project by next month.

Akshay Kumar and Rakul Preet Singh roped in to lead the Hindi remake of Tamil hit film Ratsasan. The south psychological thriller featured Vishnu Vishal and Amala Paul. The film is titled Mission Cinderella and is currently being filmed in the UK.

Akshay Kumar to essay the role of a professor in the movie Ram Setu which was announced on Diwali last year. Akki even shared his look for the film and mentioned that it is one of his most ambitious projects. The film also stars Jacqueline Fernandez and Nushrat Bharuccha in the lead.

Akki is Collaborating with YRF, for a period flick titled Prithviraj starring Manushi Chhillar as the female lead. Akshay Kumar will essay the larger than life role of fearless king Prithviraj Chauhan. The film earlier had November 2020 release date in mind but is now postponed.

Akshay Kumar's Bachchan Pandey looks to be a promising action entertainer of the Bollywood superstar. The film locked January 2021 release earlier but is now postponed for an unknown release date. Akshay's first look left fans super intrigued. The film stars Arshad Warsi as an antagonist and Kriti Sanon as the actor's leading lady.

Akshay Kumar's first-ever collaboration with director Aanand L Rai features him alongside Sara Ali Khan and Dhanush in Atrangi Re. The film is touted to be a romantic entertainer earlier locked a Valentine's Day 2021 release. As of now, no official release date of the film is confirmed yet.

Akshay Kumar's fresh announcement on the occasion of Raksha Bandhan 2020 was a film that will celebrate the love of the brother-sister bond. Rakshabandhan is helmed by Aanand L Rai which is the filmmaker's second consecutive project with Akki and the filming began in early June this year. The actor also collaborated with Zero director previously for Atrangi Re.

(The above story first appeared on LatestLY on Sep 09, 2021 10:40 AM IST. For more news and updates on politics, world, sports, entertainment and lifestyle, log on to our website latestly.com).