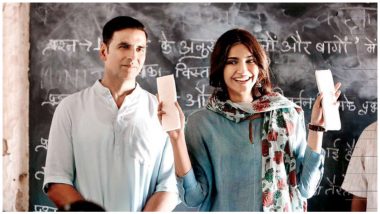 A few years back, Akshay Kumar developed a knack for starring in socially relevant, patriotic or message-driven movies. He has starred in movies like Mission Mangal, Airlift, Toilet: Ek Prem Katha, Jolly LLB 2 and most notably Padman. The last-mentioned movie featured the actor playing the role of a man who develops an affordable sanitary napkin for the women in rural areas. The movie directed by R Balki aimed at breaking taboos around menstruation and promoted access to hygiene. The film remains relevant even now. Today, as the world observes Menstrual Hygiene Day, Akshay took to his Twitter handle to remind everyone of the movie and continued his drive to break the taboo. Red Dot Challenge: Diana Penty, Kubbra Sait, Neeru Bajwa Campaign to Stop Period Shaming for Menstrual Hygiene Day.

Akshay wrote, "It’s been 2 years to #PadMan and I’m glad we managed to push the envelope a little on this taboo subject. This #MenstrualHygieneDay, I hope we move a step closer towards ending period poverty and breaking taboos surrounding menstruation." He also tagged his co-stars Radhika Apte and Sonam Kapoor in the tweet, who are yet to respond to it.

Earlier, on this occasion, Akshay also announced his support to a campaign that focuses on providing sanitary pads and kits to the female daily wage worker amid the COVID-19 pandemic lockdown.

Recently, nearly 70 female students at a university in Gujarat were pressured into removing and showing their underpants to prove they were not menstruating. As per the Women Economic Forum, 23% of girls leave school with the onset of puberty. We need more campaigning to discard the taboo and stigma.

It’s been 2 years to #PadMan and I’m glad we managed to push the envelope a little on this taboo subject. This #MenstrualHygieneDay, I hope we move a step closer towards ending period poverty and breaking taboos surrounding menstruation. @sonamakapoor @radhika_apte pic.twitter.com/NinRxcm3Cm

On the work front, Akshay will be next seen in the film, Sooryavanshi. The release of the film has been indefinitely delayed amid the novel coronavirus outbreak. You will also see him in the horror-comedy, Laxmmi Bomb. Rumour has it, that the film directed by Raghava Lawrence might drop on an OTT platform. The actor is continuing to work from home on his movie, Bell Bottom.

(The above story first appeared on LatestLY on May 28, 2020 06:06 PM IST. For more news and updates on politics, world, sports, entertainment and lifestyle, log on to our website latestly.com).