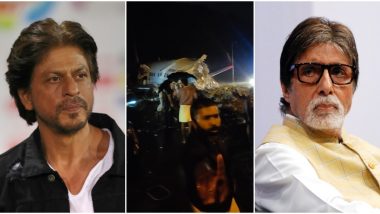 Amitabh Bachchan and Shah Rukh Khan are among the many Bollywood celebs to have tweeted on the tragic accident that happened in Kozhikode, Kerala on August 7, 2020. An Air India Express flight IX 1344 travelling from Dubai to Kozhikode crashed after overshooting the runway while landing. The plane was carrying more than 190 passengers and six crew. Air India Express Aircraft From Dubai Overshoots Runway at Calicut Airport in Kozhikode, Crashes Into Valley.

At the time of writing this article, at least 14 people lost their lives including the two pilots, with many injured. It is a double tragedy for the people in Kerala, as earlier the very same day, 15 people were killed in a landslide in Munnar due to heavy rains.

Returning to the plane tragedy, Amitabh Bachchan tweeted about the incident and offered his prayers.

Shah Rukh Khan offers his deepest condolences to the bereaved families who lost their loved ones in his tweet. Air India Express Dubai-Kozhikode Plane Crash: Akshay Kumar, Farhan Akhtar, Disha Patani and Other Celebs Send Prayers for Safety of Passengers and Airline Crew.

My heart goes out to the passengers and crew members onboard the #AirIndia flight. Deepest condolences to the bereaved families who lost their loved ones. Thoughts and prayers...

Previously, Bollywood celebs like Ajay Devgn, Akshay Kumar, Disha Patani, Sidharth Malhotra, Farhan Akhtar and others have also tweeted their condolences to the kin of those who passed away in the tragedy.

(The above story first appeared on LatestLY on Aug 08, 2020 12:50 AM IST. For more news and updates on politics, world, sports, entertainment and lifestyle, log on to our website latestly.com).