Arbaaz took a legal action against those who named him by lodging a complaint in Mumbai's Civil Court. 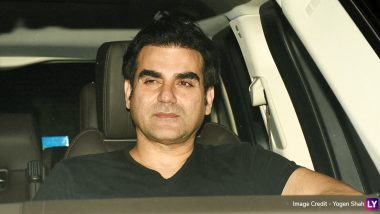 Bollywood actor Arbaaz Khan was recently defamed and dragged into a controversy. His name was taken into the death probe of late actor Sushant Singh Rajput and manager, Disha Salian. However, soon Arbaaz took a legal action against those who named him by lodging a complaint in Mumbai's Civil Court. As per the latest development on the case, Mumbai Police's Cyber ​​Cell arrested Advocate Vibhor Anand from Delhi. Arbaaz Khan Takes a Legal Recourse, Files a Defamation Suit after His Name Gets Dragged in Sushant Singh Rajput and Disha Salian Death Case.

After the complaint, the court had ordered defendants Vibhor Anand and Sakshi Bhandari, along with another defendant John Doe / Ashok Kumar to take down defamatory content published directly or indirectly by any of them. As per HT, it includes, "posts, messages, tweets, videos, interviews, communications and similar correspondence to the defamatory content in relation to Arbaaz Khan or his family members on all public domains and social media platforms including Twitter, Facebook, YouTube and other mediums and bot."

These posts claimed that Arbaaz was taken into an unofficial custody by Central Bureau of Investigation (CBI) as part of the investigation in Sushant and Disha's death case.

(The above story first appeared on LatestLY on Oct 16, 2020 01:45 PM IST. For more news and updates on politics, world, sports, entertainment and lifestyle, log on to our website latestly.com).