Dr Zeus is the original composer of the song Don't Be Shy. The track's remixed version has been used in Ayushmann Khurrana's upcoming film, Bala. The song has been recomposed by Sachin-Jigar with added vocals and rap by Badshah and Shalmali. Dr Zeus took to Twitter to slam the makers for not giving him credits. 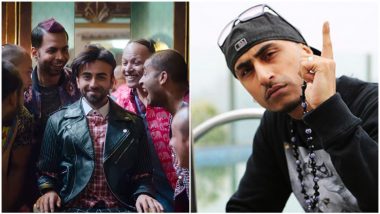 Ayushmann Khurrana's next film Bala has come with its own set of controversies. Firstly, a movie on extremely plot lines, titled Ujda Chaman, is due for a release around the same time. When makers of Bala preponed the release to come before, Ujda Chaman, the makers of the latter dragged the former to the court. Now, another legal case might ensue for the makers. The first song from Bala titled, "Don't Be Shy" was released on the internet on November 18. Very evidently the song is a remake of Dr Zeus' '90s hit by the same name. But, unfortunately, Dr Zeus was no where credited. The popular singer took to his Twitter handle and slammed Badshah, Maddock Films, Sachin-Jigar and Sony Music India.

Badshah was quick to respond to Dr Zeus' grievance. The OG was even given the credit, after the controversy gained traction on the internet, but he is no mood to let this one go. After all it is about not being credited for hard work.

Here is What Dr Zeus Tweeted:

Are u guys taking the piss @sonymusicindia @MaddockFilms @Its_Badshah @SonyMusicUK @SachinJigarLive wen did u compose don’t b shy & kangna.. more to the point how dare u guys b riding off ma old hits & fuckin them up??? Ya need to get original🖕🏽My lawyers will b in touch🖕🏽

Here is How Badshah Responded:

I am aware of the situation around ‘Dont be shy’. I want to start by saying that i love And respect @drzeusworld paaji immensely and he knows it. He has the right to get angry with me because he’s my senior and ive learnt a lot from him. And he is the last person id want (contd)

to go through something like this. I got on the song, which has been recreated by my dear friends Sachin Jigar, only after making sure we had the necessary rights. But still if there’s any misunderstanding, ill make sure it gets cleared asap. I support Zeus Paaji.

Dr Zeus was ready to forgive Badshah but Sony Music is still not off the hook. Zeus tweeted:

Big respect to @Its_Badshah for actually having the courtesy of pickin up the fone & addressing me about this don’t b shy situation.. I no issues with u bro👊🏼 ya ma fam & always will be. As for @sonymusicindia it’s not bout last min credits!!! that are still totally wrong!!

Dr Zeus also streamlined the debate a little bit and said that it should not get ugly or hateful as it only about creating awareness:

Bro no hating pls ... the purpose is not to hate or get ugly , actually is to create awareness about this... coz it happens to a lot of hard working artists around the world... https://t.co/CmmfIg2X8b

Before the controversy, speaking about remixing the number, composer duo Sachin-Jigar told Mirror, "The song is relevant to the narrative of the film and we redo it in our way. In fact, the bigger challenge was to keep the dignity and the legacy of the original song intact."

Watch the Recreated Version of Don't Be Shy Here:

Oh...wait! That One is a Different Remake! Here is the Remake from Bala:

Here is the OG Song:

This is not the first time "Don't Be Shy" has been remade. Back in 2014, it a recreated version of it was used as a promotional track for Bipasha Basu and Karan Singh Grover's Alone. The song became a huge hit back then as well. Dr Zeus was credited as original composer for it.

(The above story first appeared on LatestLY on Oct 19, 2019 02:10 PM IST. For more news and updates on politics, world, sports, entertainment and lifestyle, log on to our website latestly.com).