Bharat Teaser: Salman Khan is Here to Prove that Patriotism Transcends the Boundaries of Religion and Caste 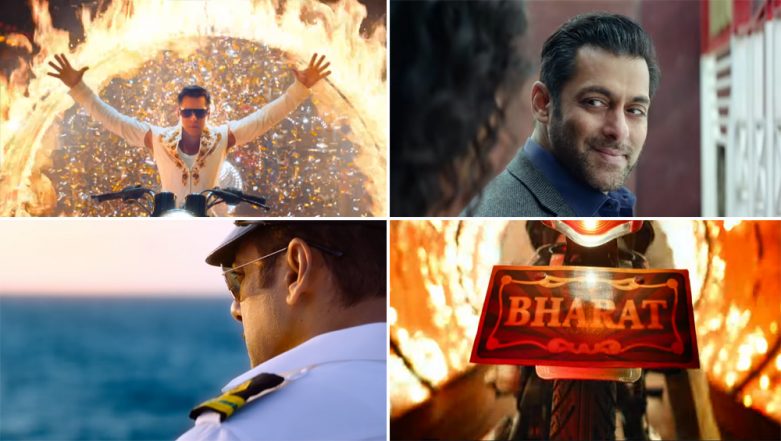 Wait, can we take a minute to gulp down what just happened? While we were aware of Salman Khan and Bharat team's plan of releasing the film's teaser ON  Republic Day, we didn't expect them to drop a day in advance. Yes, the teaser of Salman's next big project is out and it has blockbuster written all over it. Trust us, all the Bhai fans will enjoy a happy dance after watching this 1 minute 26 seconds long teaser that's enough to make you eager beaver for its trailer. Salman in and as Bharat is the quintessential hero we all were rooting for. It's time we leave behind his Race 3 debacle and focus on his next Eid release that's definitely going to strike the right chord with the critics and audiences.  Salman Khan Spends the Sunday Playing Cricket on The Sets of Bharat - Watch Video.

The movie directed by Ali Abbas Zafar is a film set in the post-independence period. It's about one man's journey as a circus performer to Navy officer and finally a true Indian at heart. Your chest is filled with pride and patriotism when you hear him say, "Ab itne bade naam (Bharat) ke aage, jaati, dharm, surname lagake, na to apna, na to iss desh ka naam kam kar sakta hun. It has all the essential ingredients of a masala entertainer or should we say something that Salman's name is associated with? Bharat is definitely one of the big releases of this year and the ones who were enjoying the failure of 'Khans' at the box -office, well, it's time you get ready for some disappointment. Katrina Kaif Walks Out of Dance Film with Varun Dhawan; Cites Salman Khan’s Bharat as the Reason.

Watch the teaser right below

However, Katrina Kaif and Disha Patani's fans will be slightly disappointed as the actresses don't find any place in the teaser. Probably the director decided to keep the best for the last. We are dying to see their scenes from this period drama and we hope the long wait for the trailer is over very soon. Salman Khan's Bharat: Disha Patani's First Look as Radha Revealed? View Pic!

Bharat is an official remake of Korean film, An Ode to My Father. The original film depicted the history of the country from the 1950s to present-day through the life of a man. According to producer Atul Agnihotri, Bharat will show us the journey of Salman and India from 1947 to the early 2000s.