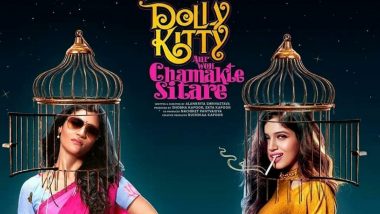 COVID-19 pandemic has forced the filmmakers to pave out a new way to release their films. OTT platforms being the second best option, the producers have found a saviour in them. Rather than delaying an already completed film, they are deciding to release it on digital streaming platforms. The recent one to join the bandwagon is Konkona Sen and Bhumi Pednekar's Dolly Kitty Aur Woh Chamakte Sitare. First INOX, Now PVR Disappointed With Films Going Directly to Streaming Platforms.

The Ekta Kapoor backed film, directed by Alankrita Shrivastava, is now set to get an OTT release if reports are to be believed. A source close to the development told pinkvilla, "Negotiations are on at this point and they will settle for the best deal they get. Bhumi and Konkona's film will definitely be releasing online but the team is currently just figuring out which digital giant they will sell it to. It all depends on the money each has to offer."

There are more Bollywood films already lined for the release on digital platforms. The latest, confirmed one being- Amitabh Bachchan and Ayushmann Khurrana's Gulabo Sitabo. The Shoojit Sircar directorial will hit Amazon Prime on June 12, ditching its original theatrical release.

Apart from this film, there are much-awaited films lined up that are most likely see an OTT release. Akshay Kumar's Laxmmi Bomb, Janhvi Kapoor's Gunjan Saxena: The Kargil Girl, Vidya Balan's Shakuntala Devi: Human Computer are some of them. It has to be seen that which platform deems fit for the release of Dolly Kitty Aur Woh Chamakte Sitare.

(The above story first appeared on LatestLY on May 28, 2020 08:53 AM IST. For more news and updates on politics, world, sports, entertainment and lifestyle, log on to our website latestly.com).