Coolie No 1: Varun Dhawan and Sara Ali Khan Starrer to Release in Theatres on January 1, 2021?

Coolie No 1 is the upcoming comedy drama that is directed by David Dhawan. The makers had initially planned to release this upcoming family entertainer on May 1, 2020, which was also Labours Day. 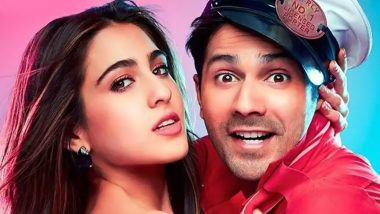 Many films, across industries, were ready to be released in theatres, but the makers had to postpone the release dates in the wake of coronavirus outbreak. There are many filmmakers and producers who are ready to wait until the cinema halls re-open, but a few decided to release their films online. Reports were rife that the makers of Coolie No 1, starring Varun Dhawan and Sara Ali Khan in the lead, are also planning for a direct OTT release. However, a source has revealed to a leading entertainment portal that makers have no plans to release the film online, instead they are planning to release Coolie No 1 in theatres on January 1, 2021. Coolie No 1: Varun Dhawan Wears a Mask in The New Poster and We Hope the Message is Clear Enough!

Coolie No 1 is the upcoming comedy drama that is directed by David Dhawan. The makers had initially planned to release this family entertainer on May 1, 2020, which was also Labours Day. But owing to the coronavirus pandemic, the film had be pushed back. In an interview to a leading entertainment portal, a source has talked about the new release date of Coolie No 1 and also why the makers have turned down the OTT option.

The source was quoted as saying, “The makers had multiple meetings over the last few weeks and everyone unanimously felt that David Dhawan’s 45th directorial should arrive on the big screen. In tough times like this, comedy is something that will bring the audience to the cinema hall and make them forget all the grief. It’s a family entertainer warrants community viewing,” reports Bollywood Hungama. The source also said, “The idea is to bring in the New Year with laughter. Varun’s Mr Lele, which has been shelved, was initially eyeing the New Year release, and now that slot will be taken over by Coolie No. 1. That’s the target for now, however it all depends on the on-ground scenario.” Coolie No 1: Varun Dhawan and Sara Ali Khan’s Next to Stream Directly on OTT if Theatres Take Long to Re-Open?

Talking about the rumours on Coolie No 1 releasing on OTT platform, the source was further quoted as saying, “They were flooded with offers from OTT platforms, including Hotstar and Amazon. But David Dhawan is a believer of big screen entertainment, and put his foot down. He has the final call on every decision related to the film, and the team also were on the same page of releasing it in theatres.” There has been no official announcement made on the new release date of Coolie No 1. Looks like movie buffs will have to wait a little longer to know by when this Varun Dhawan and Sara Ali Khan starrer will hit the big screens.

(The above story first appeared on LatestLY on Jul 08, 2020 09:42 AM IST. For more news and updates on politics, world, sports, entertainment and lifestyle, log on to our website latestly.com).