Flight: 5 Reasons Why You Should Check Out Mohit Chadda's New Film Releasing in Theatres on April 2 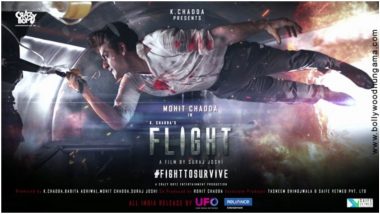 Flight is one of the releases in theatres this week, coming out on April 2. Starring debutating Mohit Chadda, the trailer of the film grabbed our attention with its ambitious plotline and thrill factor. Ever since the promo has been released, the cast and crew were showered with love and excitement from all corners. The edge-of-the-seat thriller focuses on human survival instincts, a relatable aspect in the current scenario. Mohit Chadda Weighs in on Nepotism, Says Bollywood Supported Him for 'Flight'.

As the movie releases today, here are five reasons why we should be a part of Ranveer Malhotra, a business tycoon played by Mohit Chadda’s fight to survive.

Never Seen Before Concept in Bollywood

While Bollywood has always experimented with genres to give the audience the best entertainment, somewhere down the line the stories that are showcased get a little monotonous. Flight being the brainchild of Mohit Chadda and Suraj Joshi, focuses on pure human instincts of surviving a catastrophe, a concept rarely seen in Hindi cinema. This edge of the seat thriller will take you through an emotional roller coaster.

The backbone of any movie is a strong starcast that will give their entire energy to the movie. Starring veteran actors like Pavan Malhotra, Viveck Vaswani, Zakir Hussain and young talents like Mohit Chadda, Pritam Singh, Ishita Sharma, Shibani Bedi, Flight has an array of talents to offer. The meticulously planned characters will stay with you for decades to come. Amitabh Bachchan Praises Mohit Chadda's 'Flight' Trailer, Sends Best Wishes for the Movie.

It’s not a Bollywood film if the exaggerated dialogues are missing. Filled with iconic dialogues, the makers of Flight have kept it relatable for all movie lovers. With his famous dialogue ‘Aaj marne ka mood nahi hai’ doing rounds on social media, actor Mohit Chadda has made it known that he is a fan of superstar Amitabh Bachchan.

A man surviving all alone on a plane fighting to survive and live is a rare situation one has to deal with. The team took extra efforts during the post-production of Flight to keep the movie as original as possible. Being one of the highest VFX films in Bollywood, the scenes will keep you on the edge.