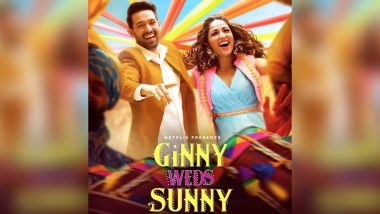 The upcoming rom-com will feature Yami Gautam and Vikrant Massey in the titular role, Ginny and Sunny, respectively. Directed by debutant Puneet Khanna, this is the first time that Yami and Vikrant have teamed up for a film. Owing to the coronavirus pandemic, there are several films that getting a direct digital release and now even Ginny Weds Sunny has joined the bandwagon. The makers have announced that Ginny Weds Sunny will premiere on Netflix on October 9, 2020. Ginny Weds Sunny's LOL Song: Vikrant Massey and Yami Gautam Groove Punjabi Style In This Peppy Number (Watch Video).

This upcoming flick revolves around an arranged marriage between Ginny and Sunny. The story unfolds when Ginny turns down Sunny’s proposal and the latter teams up with the former’s mother to win her over. The synopsis of the film reads, “Living with her matchmaker mother in Delhi, Ginny is set up with Sunny, who has given up on the idea of love and just wants to get married and settle down. But, the match is not that simple, as Ginny meets Sunny, there’s a lot more that comes to the fore than previously imagined in this tale of love, life, weddings and music.” Ginny Weds Sunny: Yami Gautam to Explore Organic Farming in Hometown Himachal Pradesh Post-Shoot.

Ginny Weds Sunny is penned by Navjot Gulati and Sumit Arora. The film is produced by Vinod Bachchan under the banner of Soundrya Production.

(The above story first appeared on LatestLY on Sep 21, 2020 09:16 AM IST. For more news and updates on politics, world, sports, entertainment and lifestyle, log on to our website latestly.com).