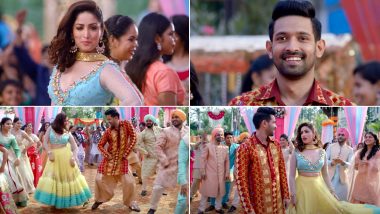 The first song from Vikrant Massey and Yami Gautam starrer Ginny Weds Sunny is here and it looks like absolute fun. There's nothing quite like a colourful, Punjabi dance number and "LOL" is just that. The romantic comedy starring this fresh pairing is all set to be out on October 9 on Netflix. Thanks to the pandemic that has managed to keep theatres shut for over five months, several films such as Ginny Weds Sunny are now going for OTT releases. While we are yet to see a trailer of the film, the first song is already here and it looks incredibly fun. Netflix India Announces 17 Original Projects Including Janhvi Kapoor's 'The Kargil Girl', Sanjay Dutt's 'Torbaaz' And It's Time To Store Some Popcorn at Home!

"LOL" has been composed by Payal Dev with lyrics by Kunaal Vermaa and sung by Payal Dev and Dev Negi. The foot-tapping number shows us a colourful wedding sequence where Yami Gautam and Vikrant Massey are seen dancing their heart outs. It is certainly refreshing to see Vikrant pull off some amazing moves and finally in a non-serious avatar like his previous works. Yami Gautam as always looks stunning and is seen owning every beat in this fun track.

The movie’s synopsis suggests that Delhi girl Ginny lives with her matchmaker mother and is set up with Sunny, who has given up on the idea of love and just wants to get married and settle down. Of course when Ginny and Sunny meet, there's a whole new equation there and it looks like the film will be filled with some light-hearted, breezy moments. Yami Gautam and Vikrant Massey to Pair Up for Ginny Weds Sunny, Project to Go on Floors on This Date.

The film has been directed by debutante Puneet Khanna and produced by Vinod Bachchan. Well, it's certainly nice to have a fun rom-com release on OTT soon given that it could lift everyone's spirits amid this pandemic. The film releases on Netflix on October 9.

(The above story first appeared on LatestLY on Sep 20, 2020 04:38 PM IST. For more news and updates on politics, world, sports, entertainment and lifestyle, log on to our website latestly.com).