Now, we don't really have to write an article to recommend a movie called Rang De Basanti. Everyone knows that it is a great movie that will stand the test of time. We are here to talk about a few films with the spirit of patriotism, that flew under the radar. Here are some of our favourite patriotic movies that deserve more attention. 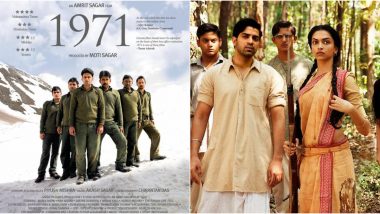 India is celebrating its 73rd Independence Day. This time around the celebrations won't be the same as every year. In the wake of the pandemic, parades, and public activity will be limited. You might not find school kids hoisting the red flag at their schools. But what would remain the same this year is the consumption of patriotic movies. Many of us will watch Lagaan or Border or Gadar the umpteenth time. New entries like Raazi and Uri will also be lauded again. So, if you, too, are gearing up to watch a few patriotic movies on August 15, we have a few suggestions. Patriotic Songs For Independence Day 2020: From 'Ae Watan' to 'Sandese Aate Hai', Bollywood Songs in Hindi to Play on 15th August (Watch Videos).

Now, we don't really have to write an article to recommend a movie called Rang De Basanti. Everyone knows that it is a great movie that will stand the test of time. We also don't want to recommend Lakshya, LOC Kargil to you. We are here to talk about a few films with the spirit of patriotism, that flew under the radar. Here are some of our favourite patriotic movies that deserve more attention. Independence Day 2020 Virtual Celebration Outfit Ideas: Anushka Sharma, Alia Bhatt and Sonam Kapoor's Easy Breezy Looks for 15th August Celebrations This Year (View Pics).

This movie will break your heart. Sorry, for not giving a spoiler alert. It is one of the finest films about war made in India and it doesn't even have scenes of war. It tells the story of prisoners of war after the 1971 war, who plan and execute a brave escape. Manoj Bajpayee, Ravi Kishan, Piyush Mishra, Deepak Dobriyal, Manav Kaul star in this amazing movie that we highly recommend.

After school children are denied to play football by British colonisers, they team up with revolutionaries and uprising of Chittagong takes place. Deepika Padukone and Abhishek Bachchan star in this film directed by Ashutosh Gowariker. We wonder why not many have watched this movie.

Based on Bankim Chandra Chatterjee's novel, the film is set around the events of the Sannyasi Rebellion. The popular song Vande Matram, sung by Lata Mangeshkar, featured in this film. Prithviraj Kapoor, Geeta Bali, Ajit starred in the movie.

Two rich spoilt brats are given the assignment to make a documentary by their film school. The two men - played by Vatsal Seth and Sohail Khan - are only interested in obtaining a degree and moving to a different country.

However, their assignment is to deliver three letters to family members of three martyred soldiers. The letters were lost by the post and will be delivered way beyond the expectation of the families. The interactions are nothing short of heartbreaking. Of course, the movie takes a lot of liberty to Bollywoodise this journey, the movie still manages to be a moving tribute to our heroes.

Many of remembering this movie for its amazing songs like "Kay Sera Sera" and "Kismat Se Tum", we don't give this movie much credit for its patriotic fervour. To thwart a terrorist attack, two ex-friends - one court-martialed army officer (Anil Kapoor) and a scorned lover (Madhuri Dixit) - inadvertently team-up. In a nail-biting climax, they manage to save their town and reconcile. It is a patriotic tale embedded into a love story.

(The above story first appeared on LatestLY on Aug 14, 2020 11:40 PM IST. For more news and updates on politics, world, sports, entertainment and lifestyle, log on to our website latestly.com).