From SS Rajamouli's RRR to Kartik Aaryan's Captain India and Kangana Ranaut's Tejas, Bollywood will witness a string of patriotic movies in the upcoming years and here's elaborating on all of them. 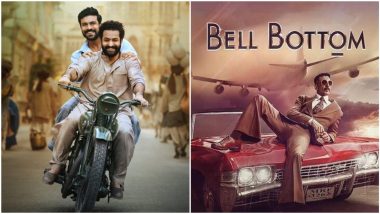 While we have a couple of patriotic movies releasing this Independence Day, the list of the upcoming movies releasing next year sounds even more promising. As India gets ready to observes its Independence Day today, we also might buckle up ourselves to witness Ajay Devgn and Sidharth Malhotra as they narrate the inspiring stories of valour of our brave soldiers. While Malhotra plays Kargil war hero, Captain Vikram Batra in Shershaah, Ajay plays Squadron leader,  Vijay Karnik, the man remembered for his courage in the 1971 Indo-Pak war in Bhuj: The Pride of India. Independence Day 2021: Five Tricolour-Inspired Dishes To Celebrate Swatantrata Diwas.

But as we say, the list this year is restricted to a mere two movies releasing on OTT.  The upcoming year, however, promises to be even more thrilling with multiple patriotic movies lined up for release. From SS Rajamouli's RRR to Kartik Aaryan's Captain India and Kangana Ranaut's Tejas, Bollywood will witness a string of patriotic movies and here's elaborating on all of them.

Starring Varun Dhawan, this biopic is being directed by Sriram Raghavan. The film revolves around the life of the youngest Param Vir Chakra recipient, Arun Khetarpal and is set in the 1970s.

Starring Kangana Ranaut, the movie is based on an Air Force female pilot. The Indian Air Force was the first of the country's defence forces to induct women into combat roles in 2016 and Ranaut's film will narrate a fictitious tale around the same storyline.

Kartik Aaryan stars as the lead in this Hansal Mehta directorial. The movie revolves around a pilot who undertakes a rescue mission and shows tremendous valour and courage in the process.

This Shoojit Sircar directorial has Vicky Kaushal playing the lead role of Sardar Udham Singh. The biopic on the Indian freedom fighter is based on how he assassinated Michael O'Dwyer in London to take revenge for 1919 Jallianwala Bagh massacre.

Another Vicky Kaushal starrer, this movie is being helmed by the very talented Meghna Gulzar. The biopic is based on the life of Field Marshal Sam Manekshaw who was the chief of the Indian Army in 1971 when India fought the Bangladesh Liberation War with Pakistan.

Starring Ishaan Khatter in lead, this biopic is based on the life of Brigadier Balram Singh Mehta, a war veteran who fought during the Indo-Pakistan war of 1971.

Akshay Kumar plays a spy who's tasked with the mission of rescuing 210 Indians aboard a hijacked plane. This is essentially a spy thriller with immense patriotism in it.

A spiritual sequel to the 2018 release, Satyameva Jayate 2 also stars John Abraham and is being helmed by Milap Zaveri. This is a vigilante drama where John will essay a dual role of a common man and a cop.

(The above story first appeared on LatestLY on Aug 15, 2021 10:30 AM IST. For more news and updates on politics, world, sports, entertainment and lifestyle, log on to our website latestly.com).