SRK who is very much vocal about his IPL team and often lauds their performance on the micro-blogging site, this time was upset with KKR's performance against Rohit Sharma led MI. Check out the full story here. 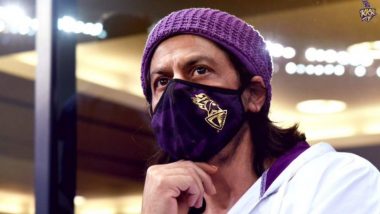 Bollywood superstar Shah Rukh Khan, who happens to be the co-owner of Indian Premier League’s (IPL) team Kolkata Knight Riders, was upset with his player's performance against Mumbai Indians on Tuesday (April 13). The actor took to Twitter and apologised to fans for the ‘disappointing performance’ of KKR at the MA Chidambaram Stadium, Chennai. KKR lost the match by 10 runs. If you've followed the game, you'll know how the ball was in KKR's court but went for a toss in the last few overs. KKR vs MI Stat Highlights IPL 2021: Rahul Chahar Registers Best Figures as Mumbai Indians Pull Off Heist.

SRK who is very much vocal about his IPL team and often lauds their performance on the micro-blogging site, this time was upset with his team's performance against Rohit Sharma led MI. KKR managed just 38 runs in the last 7 overs while chasing the target of 153. Even KKR player Harbhajan Singh reacted to the team’s loss. KKR vs MI Highlights of VIVO IPL 2021: Mumbai Indians Beat Kolkata Knight Riders By 10 Runs.

Disappointing performance. to say the least @KKRiders apologies to all the fans!

Well, now we hope is that the Korbo Lorbo Jeetbo Re team learns from the mistakes and roars back in the game. Currently, KKR is at the fifth spot on the points table. Meanwhile, talking about Shah Rukh Khan, he will be next seen in YRF's Pathan which also stars Deepika Padukone and John Abraham. Stay tuned!

(The above story first appeared on LatestLY on Apr 14, 2021 09:52 AM IST. For more news and updates on politics, world, sports, entertainment and lifestyle, log on to our website latestly.com).