While we wait for an official announcement to happen, it is said that the online streaming platform Amazon Prime Video will soon be adding the film to its list of upcoming movies. 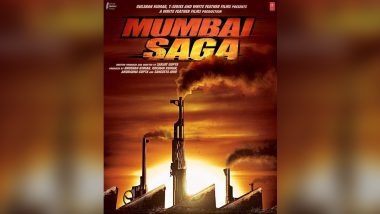 John Abraham and Emraan Hashmi starrer Mumbai Saga is one of the most talked-about films currently. The film's shoot was going on in full speed when Covid hit the world and everything came to a halt. Director Sanjay Gupta informed that while the shoot of the film was completed before the lockdown, the post-production work was still left. He said that his team is working during the lockdown and will be waiting for theatres to open to release the film. But it looks like the filmmaker might now opt for an OTT release. John Abraham's Look from Sanjay Gupta's Mumbai Saga revealed.

According to reports in Bollywood Hungama, the makers of Mumbai Saga have decided to release the film directly on Amazon Prime Video. It is being reported that they have locked a deal with the streaming giant and are all set to release the film online. The report also suggested that the right of releasing the film online have been acquired for a staggering amount, the likes of which have not been seen till date.

A source close to the development told Bollywood Hungama, “Amazon has shelled out an amount in high double-digit figures to acquire Mumbai Saga, which has now made the film one of, if not the most costly acquisition of recent times. Talks are still on, but the sums of money are on the table and the makers of the film are pretty happy with the offer. All that remains now is to thresh out the promotion details and sign the dotted line.”

While we wait for an official announcement to happen, it is said that the online streaming platform Amazon Prime Video will soon be adding the film to its list of upcoming movies. The team will also kickstart the promotion of the film very soon as well. John Abraham-Emraan Hashmi's Mumbai Saga To Go On Floors Next Month in Hyderabad's Ramoji Film City.

Talking more about Mumbai Saga, the film is a classic Sanjay Gupta crime flick. Set in the 80s, the film will take us back to the era of gangsters and will show the shift from Bombay to Mumbai. Presented by Gulshan Kumar and backed by T-Series and White Feather Films production, the film also features Kajal Aggarwal, Jackie Shroff, Prateik Babbar, Pankaj Tripathi, Rohit Roy, among others in supporting roles.

(The above story first appeared on LatestLY on Jan 01, 2021 09:51 PM IST. For more news and updates on politics, world, sports, entertainment and lifestyle, log on to our website latestly.com).