Kareena Kapoor Khan and Saif Ali Khan are proud parents once again. It was in August last year when Saifeena had made it official that they are expecting their second child together, and now on February 21, the couple got blessed with a baby boy. Read on. 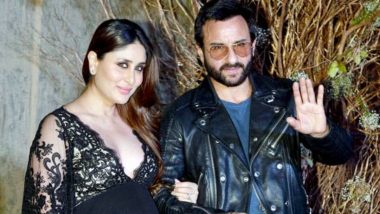 Kareena Kapoor Khan and Saif Ali Khan are proud parents once again! As according to a report in TOI, Bebo was admitted to Breach Breach Candy Hospital in Mumbai last night (Feb 21) and was blessed with a baby boy. It was in August last year when Saifeena had made it official that they are expecting their second child together. Since then family and fans of the lovebirds have been waiting with bated breath for the newborn’s arrival and finally, the moment is here. With this, paparazzi's favourite Taimur Ali Khan is now an elder brother. Kareena Kapoor Khan’s Due Date Revealed, Father Randhir Kapoor Confirms That the Baby Is Coming Soon.

Manish Malhotra took to social media and congratulated the two. Even after being heavily pregnant, Kareena was very much active working on shoots, doing commercials and whatnot. Also, Saif in one of his recent interviews had mentioned how he will be going on a break once the baby arrives hinting that such moments are rare in life. Kareena Kapoor Khan Is Revamping Maternity Fashion, This Time With the Timeless and Lockdown Essential Kaftan!

Saif had told Elle magazine in an interview, "Who wants to work when you have a newborn at home! If you don’t see your children growing up, you’re making a mistake. And I can take time off from work—it’s a privileged position. Rather than follow a 9-to-5 routine, I live like an actor. Your dharma and approach to everything are based on your career." Kareena Kapoor Khan Is Serving Major Pregnancy Goals As She Strikes Some Yoga Poses for a Photoshoot (View Pics).

Saif and Kareena fell in love with each other on the sets of their film, Tashan, and got married on October 16, 2012. It was in 2016 when they welcomed their first child Taimur, who is among the most loved star kids in showbiz.  Well, we are extremely happy for the duo. Congratulations to the couple. Stay tuned!

(The above story first appeared on LatestLY on Feb 21, 2021 11:11 AM IST. For more news and updates on politics, world, sports, entertainment and lifestyle, log on to our website latestly.com).