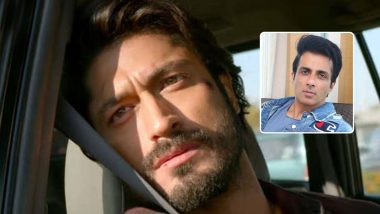 Vidyut Jammwal's Khuda Haafiz is all set to premiere on Disney+ Hotstar today at 7 PM. The actor had already invited his fans to watch First Day First show together and right on the day of its release we see the Commando star seeking help from people's messiah during the COVID-19 Pandemic, Sonu Sood. We all know for the matter of fact that Sonu Sood has been doing a generous act of uniting people with their loved ones during the lockdown. Now Vidyut Jammwal has also now reached out to the actor to help him find his missing 'wife' Nargis. Khuda Haafiz Movie: Review, Cast, Plot, Trailer, Music, and How to Watch Vidyut Jammwal, Shivaleeka Oberoi’s on Disney+ Hotstar

Worked in films like Force, the Commando franchise and Junglee, actor Vidyut Jammwal is back in action with Khuda Haafiz. The trailer garnered positive response from the audiences. The film is based on true events and tells us the tale of a man who is madly in love with his wife, and gets married in 2008 during the recession. The wife is abducted and is forced to work under a big human trafficking nexus. Will Sameer be able to rescue Nargis? We will come to know when the film releases on Disney+ Hotstar on Aug 14, 7 PM. So, stay tuned to get the latest update on the film.

(The above story first appeared on LatestLY on Aug 14, 2020 03:55 PM IST. For more news and updates on politics, world, sports, entertainment and lifestyle, log on to our website latestly.com).