Some more trouble for Sajid Khan and Alok Nath. 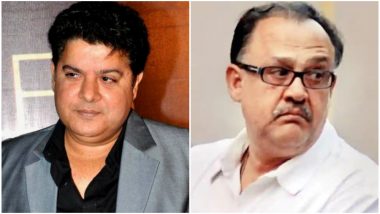 Federation of Western Cine India Employees (FWCIE) on Monday said if Alok Nath and Sajid Khan, both accused of sexual harassment, do not respond to their notices, the organisation will move a non-cooperation notice against them. Ashoke Pandit, President of Indian Film & Television Directors' Association (IFTDA) said they approached the FWICE, headed by B N Tiwari, after receiving an unsatisfactory response from Alok. "We approached our mother body FWICE as we were not satisfied with Alok's answer and as Sajid Khan has not answered, the federation has issued a second notice. If they don't respond a non-cooperation (notice) will be issued against them," he told PTI. #MeToo in Bollywood: Any Kind of Abuse Must Not be Exercised or Tolerated, Says Radhika Apte.

In a letter to Sajid, IFTDA had demanded an explanation from the director for his alleged offensive behaviour within seven days. A notice was also sent to Alok by the organisation. The veteran actor replied to the notice via his lawyer who said Alok wasn't answerable to the organisation. #MeToo in Bollywood: Salim Sulaiman to Replace Anu Malik in the Coming Episode of Indian Idol 10.

Nath was accused of rape by Tara writer-director Vinta Nanda in a Facebook post. Actor Sandhya Mridul has also accused Nath of misbehaviour. Sajid has been accused of sexual harassment by actors Saloni Chopra and Rachel White and journalist Karishma Upadhyay. Following the allegations, Sajid stepped down as the director of Housefull 4. He has been replaced by Farhad Samji.