Padmaavat: Shah Rukh Khan Finally Opens Up About Bollywood's Silence On The Controversy And You Have To Hear What He Has To Say 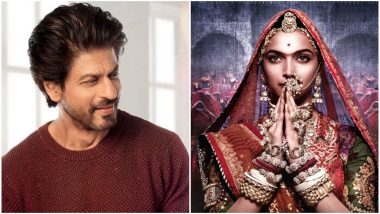 Of course, everyone remembers the furore that Padmaavat caused till a few days back. The Sanjay Leela Bhansali movie, starring Deepika Padukone, Shahid Kapoor and Ranveer Singh, was accused of insulting Rajput culture and maligning the image of legendary queen Padmavati. At the time the whole fracas, only very few celebs stood by the movie's makers, as the industry has been accused of leaving Sanjay Leela Bhansali alone in the time of fracas. Now Shah Rukh Khan, who himself had been a silent spectator during the whole crisis, has a reason on the industry's silence over the whole matter. And when King Khan talks, you have to listen to what he has to say.

Speaking at at the 'Media - Shaping the Future and Entertainment' panel discussion at Magnetic Maharashtra event, SRK denied the fact that the industry is never together during any crisis. He said, "Sometimes, when people are going in an 'uprising', you should just stand back. Nobody is scared, fearful or hiding their own skin as is said about Bollywood stars, 'Oh these people just want to earn money and not do anything for the society.' No. We love our society, we make entertaining films and we want our society to be happy."

In fact, Shah Rukh Khan revealed it was he suggested to the Padmaavat team to remain low till the movie releases. "Business of our films happen in the first few days. If you kill the first few days, the business suffers. Recently with the Viacom18 film, we had people saying 'Why don't the other stars come up, they are not coming up, oh they are hiding.' No, we are not hiding. As a matter of fact, the simple truth is this - there are certain people who go on an 'uprising', so to say. If more prominent actors, actresses and directors came and talked about this film. As a matter of fact, many a times I suggested to their team, not to talk about this, just keep quiet because you are giving wind to fire. And suddenly these people are getting more recognised by the virtue of being on all the news channels. So don't give them importance," he said.

When he was asked about whether film-makers should sacrifice creativity when it comes to the safety of the audience, SRK said that creative people are wary and they do consider the safety of the viewers. He revealed, "No filmmaker goes out and makes films to incite people, to trouble regions, to disturb the community. I never think anyone does that... Especially, all the responsible people.  Sometimes this is going to happen. As a 52-year-old father, I want you to come to the theatre - safe and sound - with your child and go happily. Even if you don't like the film, the experience should be fantastic. That's my responsibility. So the hurtfulness is not because 'I am worried about my film' but I am worried about that girl, my own son watching the film," she shared. "... No matter how much you stop them, creative people will continue making films, they will speak what they want. Sometimes there could be troubles, but they won't be scared of the hardships."

Do you agree with Shah Rukh Khan's views? Share your thoughts below.

(The above story first appeared on LatestLY on Feb 20, 2018 11:55 PM IST. For more news and updates on politics, world, sports, entertainment and lifestyle, log on to our website latestly.com).