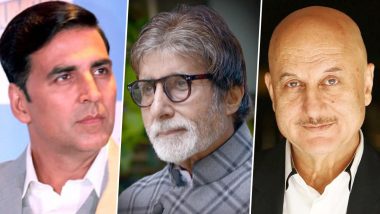 Amid the COVID-19 pandemic, India is facing another situation currently. There has been a constant hike in the price of Diesel since past 18 days. Now, on the eighteenth day, the price of diesel was increased by 74 paise per litre in New Delhi and Mumbai, making it Rs 79.88 per litre at the moment. This has garnered reactions from the aam junta who have been tweeting about the same. Also, Bollywood stars like Akshay Kumar, Anupam Kher, Amitabh Bachchan etc who were earlier vocal about rising prices of petrol on Twitter, are silent now. This led to their trolling by the netizens. Diesel Price Goes Higher Than Petrol in Delhi For First Time, Netizens React With Funny Memes and Jokes on Fuel Price Hike.

Twitterati was quick enough to find the old tweets of some of the Bollywood stars who had called out the petrol hike with their 'witty' tweets. Now, as they are silent amid the uproar on Twitter over the hiked prices of diesel, netizens are questioning them.

A journalist pulled up Sooryavanshi star's old tweet from 2011 where he had expressed, "Couldn't even get to my house at nite for all of Mumbai was queuing up for #petrol before the prices rocketed again." She asked him to voice his opinion on the current scenario as well. Here are some of the tweets. Akshay Kumar Deletes Old Tweet on Petrol Hike After Getting Trolled For His Silence on Current Rise in Prices - Read Deets Here.

Where have all these wise cracks and Lols disappeared? Do we now live in an age where making puerile wise cracks also requires great courage? https://t.co/OYqmN3kVEd

Where are this True nationalists??? pic.twitter.com/mzG6jHbdzd

A Dig On His Previous Deleted Tweet on Petrol Hike

It is a known fact that some of the stars including Akshay Kumar have been vocal supporters of the ruling Government. However, it is equally true that most of the celebrities right now are not travelling due to lockdown. Hence, it might be one of the reasons why everyone's mum on the subject yet. What are your thoughts on this?

(The above story first appeared on LatestLY on Jun 24, 2020 05:35 PM IST. For more news and updates on politics, world, sports, entertainment and lifestyle, log on to our website latestly.com).