Ranveer Singh Birthday: From Gully Boy To Befikre- 10 Highly Ranked Movies Of The Actor As Per IMDb

Ranveer has emerged as the most bankable young actor with many of his movies earning riches at the box office. On his birthday today, we tell you how IMDb users have rated these movies 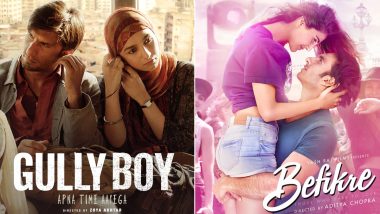 Ranveer Singh has a lot of movies waiting to release. Due to the pandemic, theatres have been closed and hence, none of his biggies are able to get a taste of the big screen experience. But the actor has no time to wait for that. He is already debuting as a Television host with The Big Picture soon. In the last decade, Ranveer has emerged as the most bankable young actor with most of his movies earning riches at the box office. His association with Sanjay Leela Bhansali has not only earned him a lot of BO laurels but massive acclaim too. The director has been able to present the real potential of Ranveer as an actor with his movies.  The Big Picture Promo: Ranveer Singh Introduces His Debut TV Show With A Bit Of Bittoo Sharma, Khilji, Gully Boy, Simmba And Bajirao (Watch Video)

It's not surprising to see Gully Boy on top It's the most recent of his releases because 2020 was a complete bummer. This underdog tale of a rapper from the slums of Mumbai gaining popularity was richly mounted and crafted.

Many still count Lootera to be Ranveer's most underrated performance. The film got a lot of critical acclaim but couldn't become a money-spinner at the box office. But Lootera is one of the most beautiful-looking movies ever made in India and then there's the healing music score!  Ranveer Singh Funny Memes Go Viral! Netizens LOL at Actor’s ‘Fashun’ Sense Displayed in Eccentric Alessandro Michele

A historical romance about Bajirao and Mastani played by Ranveer and Deepika Padukone, left many wanting for more. Many consider this to be a much better movie of the two than Gooliyon Ki Raasleela- Ram Leela

Here's where it all began. A lanky unkempt and chatty Bittoo Sharma became everyone's favourite and a star was born.

A historical fiction about Khilji and queen Padmavat garnered more controversies and threats than acclaim. But it went on to become a box office jewel despite getting a restricted release due to the controversies.

A family movie Zoya Akhtar style has Ranveer Singh playing a rich brat but with his heart at the right place.

Bhansali's world of Shakeaspear's Romeo Juliet fascinated everyone so much that it earned rich rewards at the box office. Ranveer transitioned quite well from a spoiled brat to a intense man quite smoothly.

This was Ranveer's second movie where he played a con man who gets conned because of love.

Simmba sees Ranveer Singh turn a new leaf in his life from being a corrupt cop to a judgement guy.

We are bit shocked to see Befikre on the list because Gunday was far better than that movie. But guess users on IMDb did like this strange love story.

(The above story first appeared on LatestLY on Jul 06, 2021 12:00 AM IST. For more news and updates on politics, world, sports, entertainment and lifestyle, log on to our website latestly.com).