After days of facing slander both on social media and news channels, Rhea Chakraborty has finally broken her silence on television against the unsubstantiated allegations. She did a few major interviews on the same day with channels like India Today, NDTV and News18, where she presented her side of the story 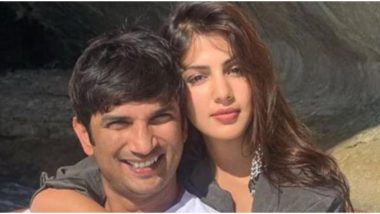 After days of facing slander both on social media and news channels, Rhea Chakraborty has finally broken her silence on television against the unsubstantiated allegations. She did a few major interviews on the same day with channels like India Today, NDTV and News18, where she presented her side of the story, and her alleged involvement in the abetment to suicide of Bollywood star Sushant Singh Rajput. Sushant Singh Rajput Case: Rhea Chakraborty Reveals She and Family Feel Suicidal, Says 'Respect Is Everything For Us, and We Have Nothing Left Now'.

To give you a brief, on June 14, 2020, Sushant was found hanging in his apartment. The Mumbai Police, in their initial investigations, ruled out any foul play and the post-mortem analysis also alludes to suicide. When the investigation shifted to any abetment to suicide, Sushant's family filed an FIR in Patna, accusing Rhea Chakraborty, his last known ex-girlfriend, who used to be living with him for abetment of suicide. Even her family members were accused in the FIR.

From thereon, there had been a heavy trial by media against Rhea and her family, with news channels and trolls accusing her of using black magic to money laundering to administering drugs in Sushant that led to his depression. Rhea, who had been silent ever since the FIR had been registered, had been facing investigations from Mumbai Police, the CBI, the Enforcement Directorate and now, even the Narcotics Bureau. Sushant Singh Rajput Death Probe: CBI Prepares List of Over 20 Questions for Rhea Chakraborty.

After days of facing various accusations, Rhea has come on news channels to present her side. We have covered some major aspects of her interview given to India Today in the below story.

Rhea Chakraborty claims that at the start of June, Sushant had been asking her to return to her home. On June 8, she had a therapy session to treat her anxiety attacks, and she didn't want to leave but Sushant insisted that she go away, as his sister Meetu will be staying with him. So as per Rhea, his sister was with him in his last days.

Rhea admitted that she messaged Mahesh Bhatt after she left Sushant's home. But it was to seek solace from a mentor, after she felt hurt over Sushant's behaviour.

Speaking to India Today, she said "I met her once when she came to Sushant's Carter Road home. I met her for like 10 minutes, I never spoke to her after, I don't have her number, I don't know how much she interacted with him either. I think she became his manager in March 2020, after that the lockdown happened, and Shruti Modi, who was his earlier manager, fractured her leg, which is Disha was assigned by Cornerstone talent agency." She also says that she has no idea if Disha's demise affected him, as she wasn't there with him then.

Rhea also talked about the much controversial Europe trip that she and Sushant had around October in 2019. She claims that while it was taking a flight from Mumbai was when Sushant told her that he had claustrophobia and he took Modafinil. When they reached Paris, she says that he didn't come out of the hotel room for three days. She added that he got better in Switzerland, but again went to his shell when they reached Italy. Rhea also said that it was Sushant who insisted that her brother, Showik, also join them in Italy. She also admitted that it was Sushant who sponsored the Europe trip, because he wanted to live (king size). Sushant Singh Rajput's Old Video Visiting Disneyland Paris Goes Viral After Rhea Chakraborty Claims That He Didn’t Step Out During His Paris Trip.

Rhea claims that Sushant was suffering from depression since 2013, and he was seeking treatment for the same, even having medications for it. Even while they were dating, she claims he was going through therapy, and it was his mother's passing away that made him feel low for long. Sushant's mother was also suffering from depression. Rhea also claimed that details of his mental condition had been shared with his family when he was alive, while she alleges that they haven't bee much proactive with how to deal with the situation.

Rhea vehemently denies using drugs or taking supplies for the same, as some of the 'leaked' chats run on certain  channels claim. She also denied colluding with Jaya Saha, Sushant's talent manager, and adding drugs to Sushant's coffee, that some sources say lead to increase in his depression. She also denied producer Sandip Ssingh's claims of being close to Sushant, saying he never came to his flat, the one and a half years they were dating. She also claimed innocence about allegations of destroying hard drives.

There were allegation that Rhea siphoned a sum Rs 15 crore that presumably went missing from SSR's bank account. She had this to say, "Sushant, Vashu Bhagnani and Rumi Jaffrey had a meeting (for a film). In the meeting, perhaps Rs 15 crore was mutually decided as the signing amount between Sushant and Vashu sir. Sushant was very happy about this. This happened in the month of February, the same month that Sushant's sister and brother-in-law OP Singh met him in Bandra. Sushant gave them the good news that he has or will receive Rs 15 crore. Now, I wasn't there, so I don't know exactly, but he certainly brought up Rs 15 crore, which also meant he was getting better, recovering from his depression and he was signing new films. I think this is why this sum Rs 15 crore stuck with everyone."

In 2018, Sushant had to face #MeToo allegations from unverified sources that he was sexually harassing his Dil Bechara co-star Sanjana Sanghi. Rhea mentions that these false allegations did affect him badly. She said, "Sanjana Sanghi had alleged that Sushant Singh Rajput harassed her, and those #MeToo allegations haunted him. Sanjana hadn't given any clarification, she finally came out 1.5 months later, but that destroyed Sushant's mental sanity. Till then, Sushant had to come out and reveal their chats himself." She claimed that publicist Rohini Iyer is part of the nexus with Sanjana.

She also added that this slandering was part of a targeted campaign against him. Rhea said that Sushant was feeling bad that he was never being considered for major awards.

There were some allegations on social media that she was close to Aaditya Thackeray, Maharashtra Cabinet Minister, who is accused of trying to protect her. A channel also ran report where her call details were leaked, where they mentioned she was speaking to a 'AU', which many on social media assumed to be Thackeray scion. So is he AU? She replied, "No, it is not. It is Anaya Udhas. I have never met Aaditya Thackeray."

As for Ankita Lokhande, Sushant's ex, who has been claiming that the actor was not suffering from depression, Rhea counter-attacked her by saying, "When was the last time she spoke to him? Not in the last 4 years at least. Then she says he spoke to her during Manikarnika shoot. She stays in his flat, and claims it's her flat." Ankita Lokhande Reacts to Rhea Chakraborty's Statements, Clarifies Details of Her Last Conversation With Sushant Singh Rajput and the Ownership of Her Flat.

While we are not saying what Rhea is saying is true - Twitterati are already finding loopholes in her claims - isn't it better to wait for the investigation agencies to complete their investigations before we make our own conclusions?

(The above story first appeared on LatestLY on Aug 28, 2020 07:44 PM IST. For more news and updates on politics, world, sports, entertainment and lifestyle, log on to our website latestly.com).