Sahil Khan Opens Up on Allegations of Driving Bodybuilder Manoj Patil to Brink of Suicide, Suspects 'Communal Angle' in the Matter

After bodybuilder, Manoj Patil attempted suicide at his home and balmed Sahil Khan for harassment in his suicide note. The accused (Sahil) has opened up on the same and denied any direct connection with Manoj. 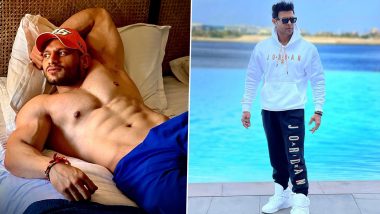 In a shocking turn of events, former Mr India winner and bodybuilder Manoj Patil attempted suicide by consuming pills at his Mumbai residence on Wednesday (September 15). As per reports, he is currently undergoing treatment at Cooper Hospital. That's not it, as the reports also hint that Manoj in his suicide note named actor Sahil Khan for allegedly harassing him. Patil has even lodged a complaint against the actor at Oshiwara police station. Now, Sahil has broken his silence on this matter. Manoj Patil, Top Bodybuilder, Attempts Suicide; Blames Bollywood Actor Sahil Khan for Harassment.

Speaking to TOI, Sahil said, “I had met a boy named Raj Faujdar on a social networking site. He’s from Delhi and had made a video that Manoj Patil took ₹2 lakhs from him and sold him expired steroids after which had developed some heart problems and skin issues as well. Faujdar has all the necessary bills and receipts of financial transactions. He wanted social media support, so I posted his video on my social media platforms asking people to support Faujdar. I also said that the steroids racket should stop. Faujdar had said Manoj Patil was not returning his money and he had even sold his motorcycle to arrange for funds.”

He also added that Raj had submitted all required papers to the police and suspected 'communal' angle in the matter. “It is strange that Manoj Patil has not mentioned Faujdar's name. I have only helped that boy on social media and Patil is directly taking my name and there is no mention of the Faujdar case. All I have done is support the boy and stood against selling steroids, since it's a crime in our country. What if the guy had died after consuming expired steroids? This could be a publicity stunt with a communal angle. I have had no direct association with Manoj, I have not had any transaction with him either." ‘Style’ Actor Sahil Khan on Sushant Singh Rajput's Death, Says 'I Was Victim of a Superstar’s Power Play'.

Sahil also added that the focus should also be on steroids abuse. He said, “Why are people not talking about the drug scam? People are dying in the gym, getting heart attacks by consuming steroids and amps. A drug mafia that is operating freely. People are not discussing or focusing on that, instead talking about Manoj Patil trying to kill himself.” Stay tuned!

(The above story first appeared on LatestLY on Sep 16, 2021 02:32 PM IST. For more news and updates on politics, world, sports, entertainment and lifestyle, log on to our website latestly.com).