Saif Ali Khan is seen in quite a different as Udaybhan Rathod and in a recently released video for House Of Pataudi, the actor is seen discussing his look. 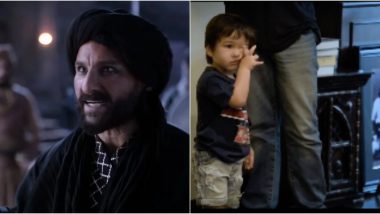 Saif Ali Khan is all set to play the lead antagonist in the upcoming period drama Tanhaji: The Unsung Warrior and fans are super-excited for it. The film stars Ajay Devgn in the lead role as Maratha warrior Tanhaji Malusare and film's trailer has already received a lot of love from the audiences. Saif Ali Khan is seen in quite a different as Udaybhan Rathod and in a recently released video for House Of Pataudi, the actor is seen discussing his look. Anushka Sharma-Virat Kohli, Varun Dhawan-Natasha Dalal, Saif Ali Khan-Kareena Kapoor Khan Pose For a Starry Frame Giving us K3G Feels!

The actor reveals how his most preferred look is with a beard and long hair. Speaking about Tanhaji, the actor also revealed how Taimur reacted to the same. In the video, Saif says, “Taimur will call me, ‘Sardarji." Sardarji!’” Further talking about his look as Udaybhan, Saif said, " “This is a change of look because I have had a daadi (beard) and a look in this whole film. I’m playing a famous character in Indian history. I don’t think you can mention Tanhaji’s story without Udaybhan’s story."

In the upcoming period drama Tanhaji: The Unsung Warrior, Saif Ali Khan plays the role of Udaybhan Rathod. Styled in his own brand, House of Pataudi, Saif talks about the preparation for the character.

Tanhaji: The Unsung Warrior also stars Luke Kenny, Sharad Kelkar and Jagapathi Babu in key roles. The period drama is all set to release on January 10 and will be clashing with Deepika Padukone's Chhapaak.At the trailer launch of Tanhaji: The Unsung Warrior, Saif said that his role was “special”. “They (makers of the film) must have thought of something when they asked me to do the role. It’s a very special role,” he was quoted by IANS as saying.

(The above story first appeared on LatestLY on Jan 09, 2020 07:43 PM IST. For more news and updates on politics, world, sports, entertainment and lifestyle, log on to our website latestly.com).